FACTS ABOUT PRISON – courtesy of Prison to Employment Connection 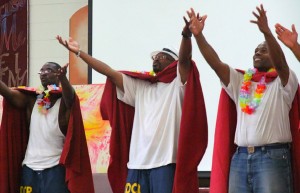 San Quentin State Prison, Marin
Starting in 2003, Marin Shakespeare Company has offered weekly Shakespeare classes at San Quentin Prison. From humble beginnings – 3 students in the first class – the program has become extremely popular as inmates reap the benefits of personal growth through Shakespeare.  We now have two Shakespeare groups, each of which performs an annual performance of a Shakespeare play. The men also write and perform autobiographical theatre pieces inspired by themes from Shakespeare, a Parallel Play which we call “Stories from San Quentin.”
Since 2014, we have also worked with incarcerated Veterans each year to create an hour-long play about issues of importance to them, in partnership with Veterans Healing Veterans from the Inside Out.

Solano State Prison, Vacaville
Starting in 2014, we offer Shakespeare programs on both Level II and Level III yards, as well as Drama for Re-Entry, which uses drama therapy inspired exercises to allow inmates with release dates to “rehearse” how they want to act when they return home.

Folsom Women’s Prison, Folsom
Starting in 2015, we have offered Shakespeare and Drama for Re-Entry for incarcerated women.

High Desert State Prison, Susanville
Starting in 2017, we offer two Shakespeare groups on D-Yard, Level IV (maximum security). The program has allowed incarcerated men to engage with Shakespeare and how it relates to their own lives.

California Medical Facility, Vacaville
Starting in 2017, we offer a Shakespeare program at this institution, serving inmates on Level II and Level III.

Deuel Vocational Institution, Tracy
Starting in 2017, we offer a Shakespeare program for Level II and III inmates at this home of the “Gladiators”.

To make a donation in support of Shakespeare for Social Justice, click here.