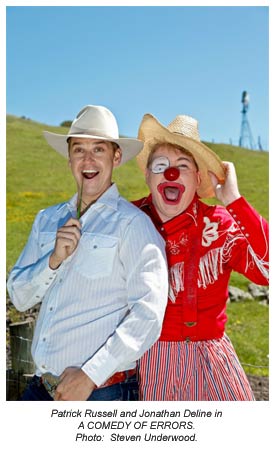 Y’all may think this is a real whopper, but this story’s truer than a new-minted, gold-plated, Smith & Wesson six-shooter.

In old West Texas, the towns of Amarillo and Abilene were feuding, and feuding big time. When an old geezer from Amarillo showed up in Abilene, Sherrif Duke and his Deputy were planning on hanging him up on the nearest tree. But the old coot told such a sob story – about how he’d had two sons, separated in a river boat accident 23 years hence, and he aint seen hide nor hair of the one son, his servant, or his own wife in all that time and was searchin’ high and low – that the Sherrif gave him a day to rustle up a ransom instead of pumping him full of lead right then and there.

Another Amarillan cowboy, riding into town, is warned by a Dance Hall girl, and sends his servant off to put up his bags of gold safe and sound at the Long Branch Inn. When his servant returns, he pretends not to remember the money, and tells his master to come in to supper, which earns him a beating.

Two ladies of the town, Adriana and her sister Luciana, talk about what a bad lot it is to be a woman. Adriana’s servant arrives to say her husband is acting like a lunatic and won’t come home to supper. When we see the cowboy next, he’s checked on his gold – safe at the Long Branch – and his servant denies having joked with him about it, which earns him a beating. Adriana, coming to find her man, convinces him to go inside to supper. The servant is left to guard the gate.

The next cowboy we meet is running late, on his way home to supper, accompanied by his buddy Luke, and he asks the town’s goldsmith Angela to tell his wife he’s been consulting with her about a gold chain he’s ordered. Arriving home, he finds his door locked and a surly servant blocking the way. After a whole lot of yammering and hot air, the cowboy decides to go dine with the town Madam instead. 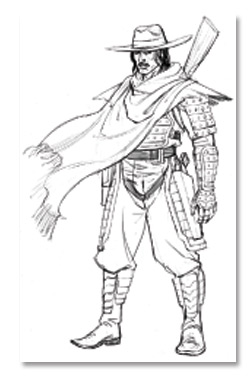 After supper, we learn that the first cowboy we met has been courting Luciana, the sister of the woman who claims to be his wife – although he can’t figure out why in tarnation Adriana’s acting like a one-legged man in a butt-kicking contest and Luciana is being so darned uncooperative. His servant runs in all aggravated saying there’s a kitchen wench ugly as a mud fence trying to bump up to him, and the two men decide it’s time to skeedaddle. But then the cowboy remembers Luciana, and when Angela comes in and hands him a gold chain, refusing to take any money for it, he’s just plumb pole-axed.

Next we learn that Angela owes Luke some cash, and when she asks the cowboy for the gold for the chain, he denies ever having received it, and sends his servant off to buy a bull whip. When the cowboy won’t pay his bill or fork over the gold chain, the Deputy arrests him. His servant enters and tells him there’s a stage coach ready to get them out of town quick; he sends her to Adriana for gold to pay his bill and get him out of custody. Meanwhile, Luciana is confessing to Adriana about her wooer, which makes Adriana madder than a wet hen. When the servant comes in to say her husband has been arrested, she forgives him and sends a bag of gold.

Running in with the gold, the servant gives it to his master. When the Madam sees the gold chain he’s wearing, she asks for it in return for the ring she gave him earlier at supper, but he runs away like a calf at gelding time. The Madam decides she’ll have to talk to his wife come hell or high water.

Meanwhile, the cowboy is assuring the Deputy he’ll have the money he owes soon; just then his servant enters with a bull whip, but no gold – which earns him a beating. When Adriana enters with a posse of friends, the Madam accuses him of being insane. Adriana asks Dr. Pinch, the medicine man, to try to cure him. The mob ends up roping him up with his servant and hauling them off. When the cowboy and servant re-enter with pistols drawn, the mob runs off as if chased by a tornado. As the whole town gathers once again, the cowboy and his man run into the local priory, and the Abbess comes out to quiet the crowd, refusing to hand over the men who have sought sanctuary. The Abbess accuses Adriana of being a jealous scold, whereupon she complains to the Sherrif, who’s preparing to string up the old geezer from Amarillo now that the sun is about to set. Hearing everyone’s story, he calls the Abbess. The end of this yarn is for you to find out. Hold onto your hat, or you may just split your britches – or end up whomperjawed yourself.