As the play begins, we meet Orlando, the youngest son of Old Sir Rowland de Boys. Sir Rowland was loyal to Duke Senior — recently deposed by his brother Duke Frederick. While Duke Frederick rules, Duke Senior and his men have retreated to exile in the Forest of Arden. Sir Rowland de Boys left three sons; the eldest, Oliver, has refused to pay for his younger brother Orlando’s education, which rankles Orlando and his old faithful servant Adam. The brothers fight, and then Charles the Wrestler visits Oliver to report that Orlando is planning to challenge him in the upcoming wrestling match. Charles is loathe to hurt the young man, but Oliver tells Charles to break Orlando’s neck.

Rosalind, the daughter of Duke Senior, is sad because of her father’s banishment, and her best friend Celia, daughter to Duke Frederick, tries to cheer her up, as does the jester Touchstone. A courtier, Le Beau, comes to report that there will soon be a wrestling match, with Charles taking on all challengers — he has already wrestled with three brothers and broken each one’s ribs. Celia and Rosalind meet the next challenger, Orlando. Miraculously, Orlando is able to beat Charles, but when Duke Frederick learns he is the son of Old Sir Rowland de Boys, the Duke chides him for his father’s disloyalty.

Rosalind gives Orlando a necklace and Orlando feels his heart has been overthrown. Le Beau warns Orlando to leave court, to avoid Duke Freder-ick’s displeasure. As Celia teases Rosalind about Orlando, Duke Frederick suddenly tells Rosalind to leave the court im¬mediately, as he no longer trusts her. Celia pleads in vain for her friend, then hatches a plan. The girls will flee in disguise to join Rosalind’s father in the Forest of Arden.

When we meet Duke Senior, he shares his enjoyment of living in nature. Meanwhile Duke Frederick learns that Celia and Rosalind have fled, believed to be in the company of the fool Touchstone and Orlando. Warned by Adam that Oliver intends to kill him, Orlando runs away, taking the faithful Adam who offers his life savings to aid their escape. Rosalind, disguised as a young man named Ganymede and Celia, disguised as a peasant woman Aliena, arrive wearily in the For¬est of Arden with Touchstone, and overhear the young shepherd Silvius sighing to the elder Corin of his unrequited love, for which Rosalind feels sympathy. Questioning Corin, they learn of a sheepcote for sale, which they plan to buy for their new home.

As Duke Senior’s men amuse themselves with song, Orlando vows to find food for the ailing Adam. As Jacques, a melancholy follower of Duke Senior, reports seeing a fool in the forest, Orlando stumbles upon the men, demanding food for the moribund Adam. The Duke welcomes him gently and invites him to share their feast. Meanwhile Duke Frederick instructs Oliver to find his missing brother Orlando, or forfeit all he owns.

Orlando’s thoughts have turned to love, and he papers the trees with love poems to Rosalind. Corin and Touchstone discuss the difference between court and country life. Celia and Touchstone tease Rosalind about the love poems, and Rosalind is giddy to hear that Orlando is in the forest. When they meet, Rosalind (disguised as Ganymede) convinces Orlando to let her try to cure him of his lovesickness by pretending to be his beloved and showing him how many faults women possess. Orlando agrees. 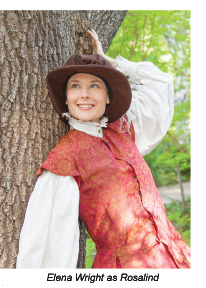 Meanwhile, Touchstone has been wooing the goatherd Audrey, and arranges for Oliver Martext, a bumbling priest, to marry them – such a poor marriage will make it easy later for Touchstone to leave her. Celia chides Rosalind for toying with Orlando, and the women overhear Silvius being scorned by his love Phebe, a proud shepherdess. Phebe promptly falls in love with Gany-mede and has Silvius deliver a love letter. Rosalind and Orlando continue to exchange witty banter. Then a man appears and reports that as he slept, a lioness attacked him, which Orlando fought, injuring himself in the battle. The man turns out to be Oliver, who has reconciled with Orlando. When Oli-ver delivers a bloody handkerchief to Ganymede, she faints. Touchstone and Audrey meet William, a forest youth in love with the goatherd Audrey, and Touchstone rebuffs him. Oliver reports to Orlando that he and Celia have fallen in love and will be married the next day. Orlando is growing tired of pretend courting, as Silvius describes true love. Rosalind vows to help Silvius, Phebe and Orlando and all plan to meet the next day. As the lov¬ers assemble before Duke Senior, secrets are revealed and almost everyone reaches a satisfying resolution.