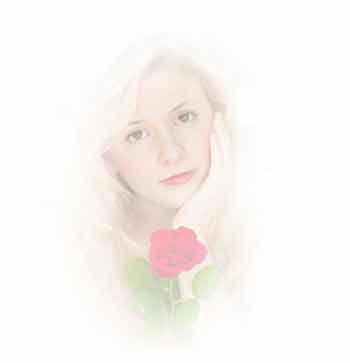 In Verona, two noble families – the Capulets and Montagues – have been enemies feuding for a long time. When two Capulet servants brawl in the street with two Montague servants, the Prince of Verona vows that further public violence will result in death for the perpetrators. Lord and Lady Montague question their nephew Benvolio about the quarrel, glad their son Romeo was not involved. Romeo has not been coming home nights, Benvolio learns that Romeo is hopelessly in love with a woman who spurns his advances, causing his sadness. Benvolio tells Romeo to forget her and consider other young beauties of Verona. Meanwhile, Lord Capulet discusses a marriage arrangement for his daughter Juliet with Count Paris, and invites Paris to a party that night to meet Juliet. Capulet instructs his servant Peter to invite a list of other guests; the illiterate Peter enlists Romeo’s help in reading the list, whereby Romeo and Benvolio learn of the party and make a plan to join the festivities in order to see Romeo’s love, Rosaline, who is invited to the party.

As Lady Capulet prepares Juliet to meet Paris, we learn that Juliet’s Nurse has a bawdy sense of humor and is delighted that Juliet will soon marry. Romeo and Benvolio meet up with friends, including the volatile Mercutio and the young men plan to crash the Capulet party, disguised in masks. At the party, Romeo sees Juliet and immediately forgets Rosaline; Romeo and Juliet touch hands, then kiss, then discover they have each fallen in love with an enemy.

Later that night, Romeo’s friends try to find him, but decide he does not want to be found. Romeo has scaled the Capu-let walls and sees a light in a window. Spying Juliet, he speaks of his love. When Juliet, not noticing Romeo, shares her heart’s passion with the night, Romeo speaks to her. Quickly recovering from fright and modesty, Juliet confesses her love, and asks Romeo to get a message to her about when they can meet to marry. She will send her Nurse to find Romeo in the morning. An exulant Romeo goes to find Friar Lawrence, who has a passion for horticulture and who knows which plants heal, and which poison. The Friar tells the hasty youth to slow down, but agrees to conduct the marriage in the hopes it will bring about a reapproachment between the two feuding families.

Meanwhile, in the street, Benvolio predicts that Tybalt, who saw Romeo at the party, will challenge the Montague youth to a duel. When Romeo appears, Mercutio teases him about disappearing the night before. Juliet’s Nurse and her servant Peter also are the target of Mercutio’s wit until Romeo sends him away so he can tell the Nurse to have Juliet meet him at Friar Lawrence’s cell that afternoon. An impatient Juliet finally wrests this message from the Nurse upon her return. Friar Lawrence conducts a secret wedding.

As the day’s heat intensifies, Benvolio and Mercutio encounter Tybalt, seeking Romeo. When Romeo appears, Tybalt insults him and challenges him to fight, but Romeo – secretly married but not wanting to reveal this information – refuses. An incensed Mercu-tio pulls his sword on Tybalt. As the two fight, Romeo tries to stop them, and Mercutio is dealt a fatal wound under Romeo’s arm. Romeo then engages Tybalt, killing his new wife’s cousin before realizing his folly. The Capulet family insists the Prince keep his word and put Romeo to death. Conceding that Tybalt was also at fault, the Prince spares Romeo’s life, but exiles him from Verona.

When Juliet, awaiting her wedding night, learns instead of Tybalt’s death, she is inconsolable, as is Romeo upon hearing of his banish¬ment. The Nurse and Friar contrive for the young couple to have one night together before Romeo must leave for Mantua. Hoping to allay Juliet’s grief, Capulet arranges for her to marry Paris. Ro¬meo and Juliet spend one loving night together before Juliet 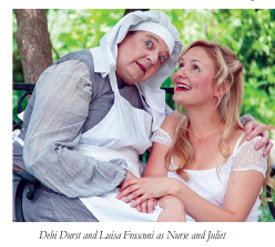 learns of the planned marriage, which she refuses. Her father threatens to cast her out into the streets. The Nurse counsels Juliet to marry Paris, since no one knows of her earlier wedding to Romeo. Wanting better help, Juliet goes to the Friar, only to meet Paris, who professes his love. Juliet threatens to kill herself if the Friar will not help her. He gives her a potion which will induce a death-like state. The plan is that Juliet’s family will put her corpse in the family vault, from which Romeo can collect her upon her revival and take her to Mantua. Juliet’s seemingly dead body is discovered, and borne to the vault. Romeo hears news of Juliet’s death and buys poison from a destitute apothecary. Friar John reports he was unable to give Romeo the message about Juliet’s fake death. When Romeo comes to the Capulet vault he meets a mourning Paris who will not depart, and the two fight. Romeo and Juliet are reunited, and the families join hands at last.
Marin Shakespeare Company v 2014