THE STORY BEHIND “TRAVESTIES” 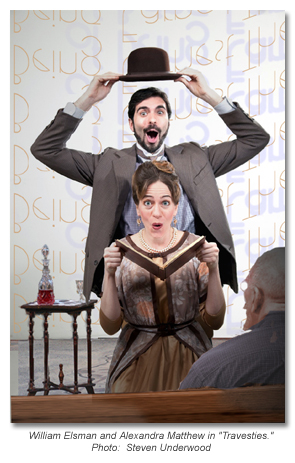 In 1917, James Joyce, Vladimir Lenin, and Dada founder Tristan Tzara were all living in Zurich. Joyce was writing Ulysses, Lenin was trying to get back to Russia to take part in the revolution, and Tzara was redefining Art. Zurich was filled with Italian opera, French painting, German music and Russian ballet and Joyce wanted to showcase the English arts. As business manager for a group called “The English Players,” he put on a production of The Importance of Being Earnest. Henry Carr, a minor British Consulate employee, played Algernon. Carr and Joyce ended up suing each other. Joyce parodied (and immortalized) Carr in Ulysses, turning him into an obscene drunken soldier in the novel’s “Circe” episode. When Travesties premiered, Tom Stoppard received a letter from the real Henry Carr’s widow expressing surprise that her husband had become a character in a play. Unlike the historical figures in Travesties, Cecily and Gwendolen, of course, are characters from The Importance of Being Earnest. And by the way, can you spot the many Shakespeare references included in the script?