“Violet’s definitely not a witch— 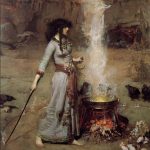 but how to explain what she was really doing that night?”

Scotland appears to be replete with witches, but when a “good” woman ends up accused, her friends search their souls to figure out what can be done. Must she really die, and what will happen if the truth comes out? Joanna Baillie’s gentle 1836 “tragedy” offers a frank plea for compassion… for everyone—just the balm we need in this fractious age.

Joanna Baillie (1762 – 1851) was a renowned Scottish poet and dramatist who wrote mostly on topics of morality and centered women—often (gasp!) middle-aged women—and their issues in her plays. Encouraged by her brother, she published her first book of poetry in her late 20s and, despite waiting until her other male relatives had died to publish the first of her 26 plays, she was dubbed the “female Shakespeare of a later age.”