Adapted for the stage and
Directed by Lesley S. Currier 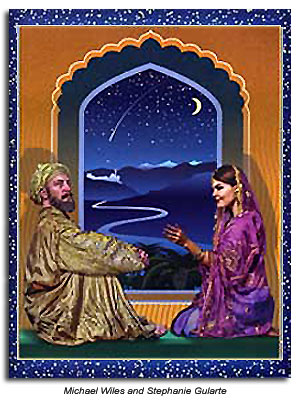 Shortly after 9/11 the incomparable Ben Cameron, then Executive Director of Theatre Communications Group, came from New York to San Francisco to address the Theatre Bay Area annual conference. While many of us were questioning our role as local theatre artists in a world where international affairs and cultural differences suddenly seemed so much more important, Ben reminded us that what we do matters. As theatre artists, we are story-tellers, and just as when a house is afire, the first thing we grab are our family photo albums, the stories we tell on our stages are our collective history and are even more important to preserve when your figurative house is burning down around you.

Ben’s comments about story-telling were one of the things that reminded me of that powerful story about story-telling, The Thousand and One Nights. The idea of telling that very classical story at Marin Shakespeare Company stayed with me for several weeks. Finally, not being able to shake it, I talked to Bob about the idea of dramatizing Shahrazad’s story for our audiences. He immediately agreed that this was a story we should be telling now.

When we couldn’t find a script we thought would work well at our theatre, Bob encouraged me to write one. Putting the script together was a tremendous joy. 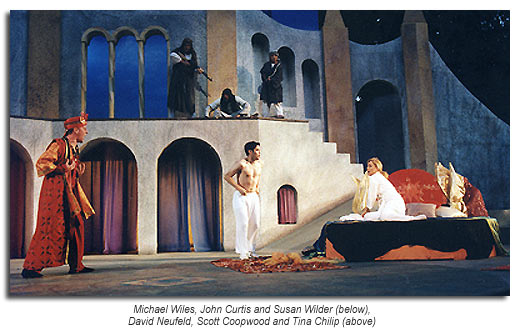 I was scrupulous about writing only in my “off-time” from running the company; I didn’t want this creative task to take away from fundraising and management. So I would write at night or in the early morning, on weekends and through the holidays. Soon, I fell into the habit of reading to my son Nate, then 8 or 9, the portion of the story I’d written each night, breaking off wherever I had stopped. It was a magical time. 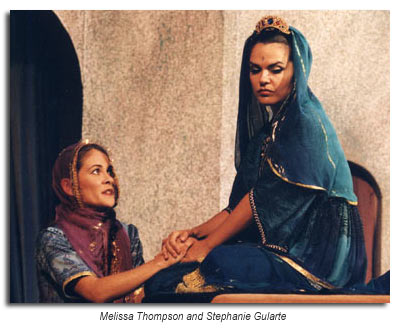 At first, we thought that the brilliant Doug Rushkoff, an old friend from college, would come direct the piece. Doug generously read the script as it progressed and offered deep insights. But eventually his book tour schedule, and also, I think the fact that the play became more of an optimistic romance and less of a critical political-historical exploration led him to bow out. 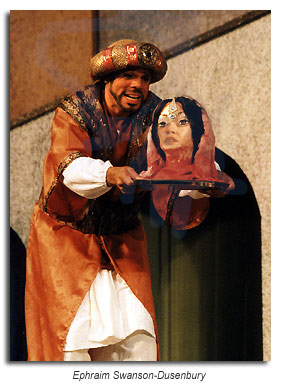 Meanwhile, I had somehow convinced the incredible Vince Delgado not only to compose the music but to put together a small ensemble including himself to perform live at every performance. This was perhaps the greatest triumph of the production. I also found an astounding choreographer and somehow managed to assemble a perfect cast. Denise Kirchner and I had a wonderful time figuring out how to create jinnis and elephants and other fantastical apparitions and Cynthia Beckley created a complex costume scheme for the more than 100 characters in the show. 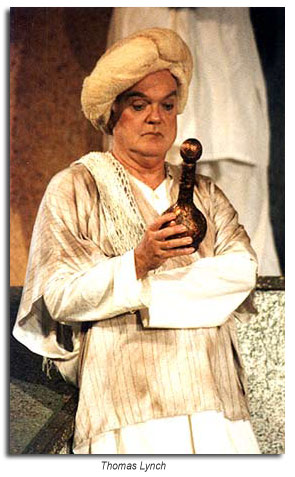 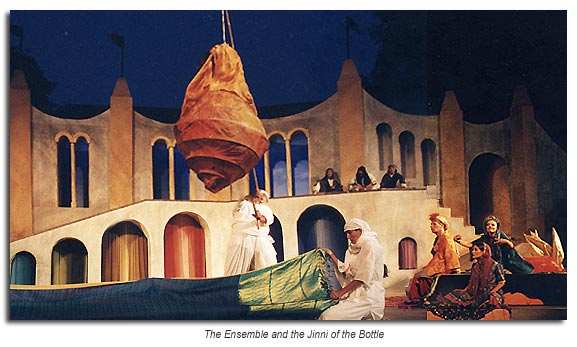 It may be hard for me to have an unbiased perspective on this play. There are several things I would try to fix for future productions. Audiences enjoyed it tremendously and it is one of the plays we most often hear audience members requesting that we re-mount. It has been done since at several schools in a shortened version. And I was heartened that several people who saw the production whose roots are in the Muslim world were very enthusiastic with their praise. All in all, we felt good about telling a story we felt had immediate importance, and we discovered that The Thousand and One Nights are as bottomless in their fascination as is Shakespeare.

From the Playbill – Director ‘s Notes 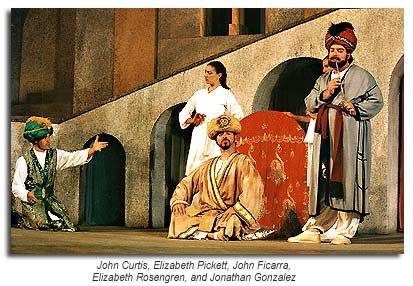 After last September, we, like many other Americans, became much more interested in the Islamic world: more than 20% of the people on this planet. When we realized that a rich, colorful collection of classic Islamic stories existed – The Arabian Nights – it seemed timely to explore that material. 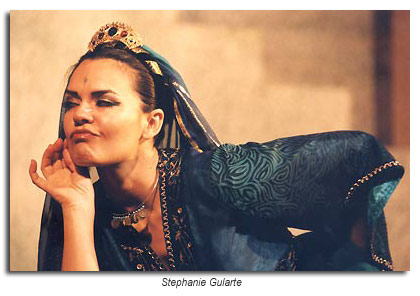 The stories show a powerless woman who is able – through story telling – to change her husband from an angry, despairing murderer into someone who is able to love again. This message of hope, coming from the heart of the early Islamic tradition, is a message for today’s world, a world where we will all need to change in difficult ways in order to find peace. We looked around for a theatrical adaptation that would express the deep messages found in the stories and showcase their variety, humor, magic and individuality, and ended up deciding to create our own original play. 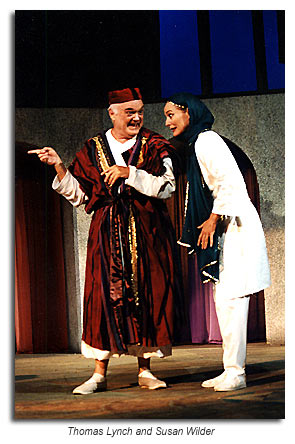 While we have tried to stay true to the spirit and detail of the stories, we too are part of their continuing evolution and we bring to them both a personal and a Western sensibility, accent, and instinct. We have tried to counter-balance this tendency by working closely with some fabulous, knowledgeable collaborators.

Vince Delgado has composed and is performing original music for the production, based on authentic Arabic modes and rhythms. Yasmen Sorab Mehta has worked closely with the cast not only to choreograph movement sequences, but also to teach us many details such as how an Arabic woman would wash laundry, or how to a sultan would eat at a banquet.

Ultimately, we hope to present a theatrically satisfying evening full of many kinds of richness. As theatre artists, our job – like Shahrazad’s – is to tell stories. It is through listening to and empathizing with the stories of the multitude of our neighbors on this planet that we can forge the bonds that will allow us to work together to find solutions to the many problems we share. 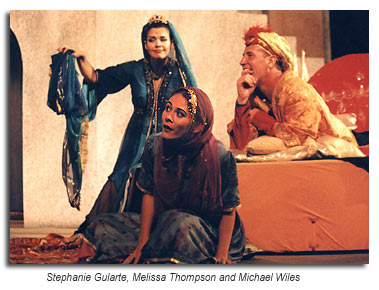 “Adapted for the stage by director Lesley S. Currier, Marin Shakespeare’s Arabian Nights is by turns spectacular, comical, and poignant… Each tale invokes a universal truth as applicable now as it was a thousand years ago. Marin Shakespeare stalwart Scott Coopwood – he appears in all three MSC productions this year – is exemplary as the wandering Storyteller, anchoring the entire story-within-story-within-story.

Michael Wiles lends a disturbing instability to the role of Shahrayar, the King. The stunning Stephanie Gularte is riveting as Scheherezad, her calm center the eye of Shahrayar’s storm. 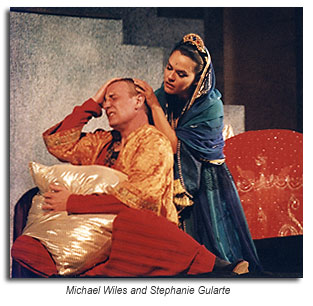 Ensemble players Ephraim Swanson-Dusenbury and Jonathan Gonzalez are outstanding. There are no weak performances by the versatile cast, who perform many roles in amazingly rapid succession. Yasmen Sorab Mehta’s choreography adds a nice degree of authenticity. Bruce Lackovic’s set is a wonder of seemingly solid yet ephemeral elegance; morphing from palace to cave to village street with only a change of props and lighting, beautifully designed and executed by Denise Kirchner and Ellen Brooks, respectively. 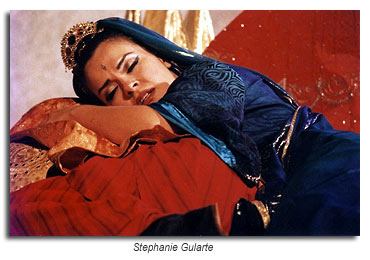 Cynthia Rose Beckley’s clever costumes range from spare to radiant. Special praise must be showered on Vince Delgado, whose original music and live playing elevate Arabian Nights from a few hours’ amusement to an exuberant experience…Overall,Arabian Nights is great, marvelous fun and a wonderful way to enjoy a midsummer’s night.”

“In many ways, this is a designers show. Denise Kirchner’s severed heads and fanciful genie puppets were instant favorites. Imaginative lighting by Ellen Brooks helps set the mood for Bruce Lackovic’s graceful Moorish set, and the ensemble is enlivened by Cynthia Rose Beckley’s multicolored period costumes.” 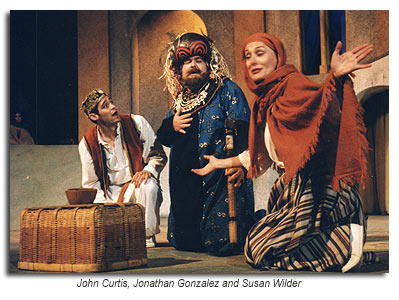 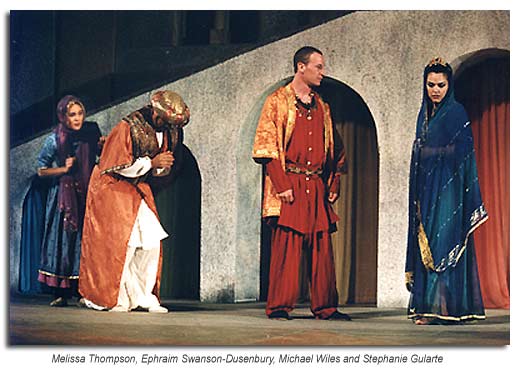 “The entire play is a series of stories spun by Schahrazad and acted out by the Marin Shakespeare cast. Most are comic, full of energy and pure fun though they all have some not too subtle moral for Shahrayar to contemplate. Their cumulative effect, unlike a drug, is healing. 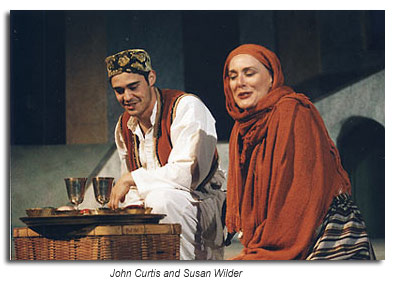 More than once in the New Testament, a fine book of stories, Christ is asked why he speaks in parables or stories. It seems that when people are on the wrong path you can’t just tell what they’re doing wrong. They’ll deny it or be more convinced that what they’re doing is right. But through the metaphors in stories, they have to hear and hear again and still not understand, but eventually something in the very mystery of the story reveals something of the mystery of their life and a healing takes place.” 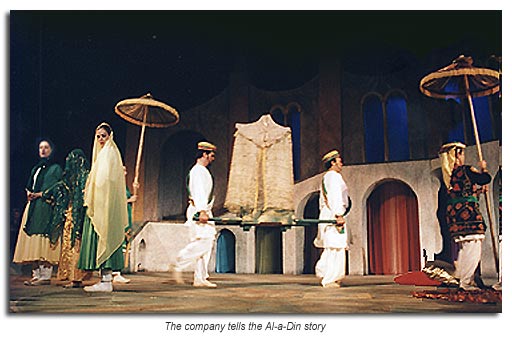 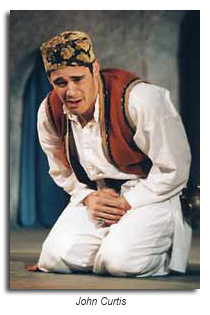 “Not only adapted but directed by…Lesley Currier who has gathered a cast and production team that has made a delightful family entertainment – but not just for families – by spinning out these ancient tales across the boards under the summer night sky…Yasmen Sorab Mehta’s choreography and movement direction is excellent; Vince Delgado and his ensemble play splendid Middle Eastern music throughout.” 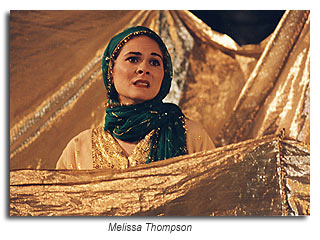 “The opener for Marin Shakespeare Company’s 2002 season is overflowing with intense dramatic and comedic contrasts in writer/director Lesley Schisgall Currier’s adaptation of the tales…‘A Thousand‘ holds memorable thematic interest and generous moments of high comedy supported by creative props, bright costumes, and a mostly stellar ensemble… Many comic moments ensue, with fabulous performances from the ensemble (especially from MSC veterans Jonathan Gonzalez and Thomas Lynch). They portray too many characters to be named, and their performances are the highlights of the show…kudos to the ensemble, who, in enacting the narrated tales, are the real heart – and entertainment – of the show.” 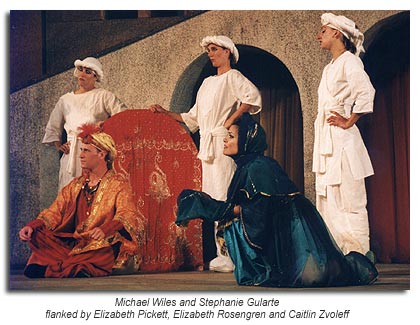 “This story within a story is a classical narrative structure, and we can see why, in this production, it is so effective…The production emphasizes the fine art of storytelling…The device of showing the mechanics makes for spell-binding theater. The ensemble of superb actors, especially John Ficarra, Jonathan Gonzalez, and Susan Wilder, handle the stories’ range with ease.” 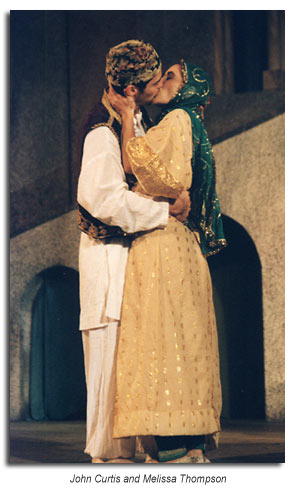 “This version of the Arabic classic is both poetic and humorous, with each story ending with a wise lesson. And just as the King awaits another story so do we. One of the most clever and enchanting stories is that of the old miser shunned for his smelly old shoes, that accidentally find themselves on a rich man’s feet at the baths…Interpretations by Stephanie Gularte as Schahrazad, Michael Wiles as the King, and Melissa Thompson as Dunyazad, along with the remainder of the cast, are awe-inspiring under the diligent baton of Lesley Currier.” 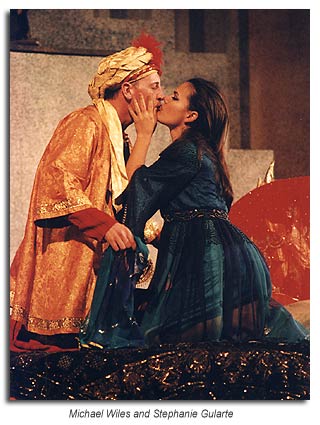 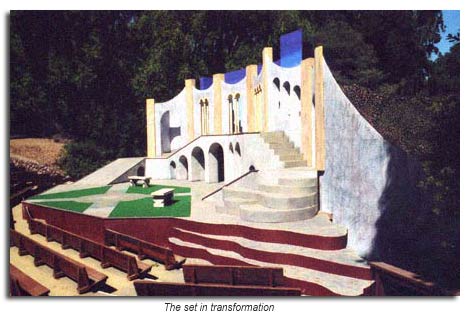 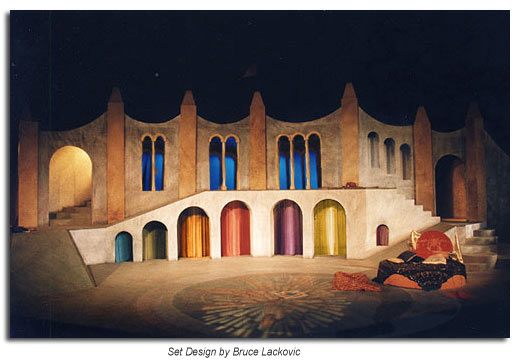