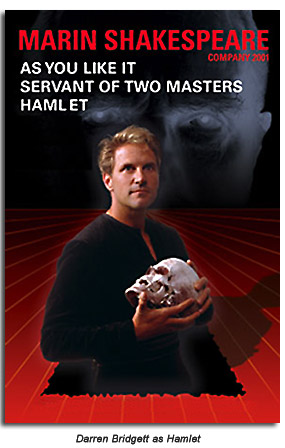 By far the most striking thing about this production was the fact of presenting it before and after the events of September 11, 2001. We had decided to honor and fete Ann Brebner and John Brebner by celebrating the 40th anniversary of the original Marin Shakespeare Festival, a lovely event attended by wonderful alumni like Dan Caldwell, Dakin Matthews, Bob Feero, George Ede, Jackson De Govia and Hope Alexander Willis. The event was held on September 8, although we had originally planned it for the following week. Our first production of Hamlet, a fantastic dinner party and torchlight procession to Forest Meadows where Ann and John were regaled with myriad memories of the festival they created and nurtured from 1961 to 1973, and which had inspired our revival as Marin Shakespeare Company in 1989 – this was an incredibly high time for us all.

That high was shattered the Tuesday morning following when we awoke, stunned, to the events occurring on the East Coast.

By the following Friday, our next scheduled performance, as we joined our nation in disbelieving grief and uncertain sorrow, we decided to continue with our performances of Hamlet. In my introduction to the play that night, I did something I had never done before from the Forest Meadows stage: I offered up a prayer. The audiences were sparse. We had several nights with fewer than a hundred brave souls, huddling together to witness and share Hamlet’s grief and uncertainty in what felt like a chamber production of this huge play. 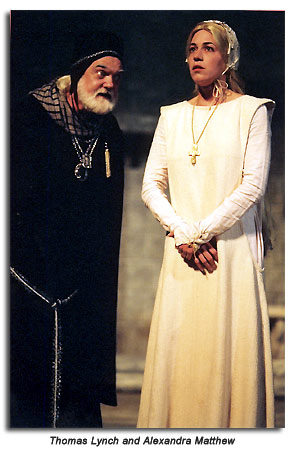 There may never be a definitive production of Hamlet. This production was inspired by Darren Bridgett, who Bob felt had the range and depth needed to tackle the melancholy Dane. Darren gave a highly personal, physically passionate, funny and intimate reading of Hamlet. Many audience members were moved and delighted by his portrayal. Others missed a more traditional, verse-centered approach. Alexandra Matthew as Ophelia was stunning and shockingly vulnerable. 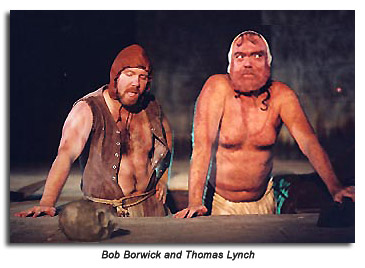 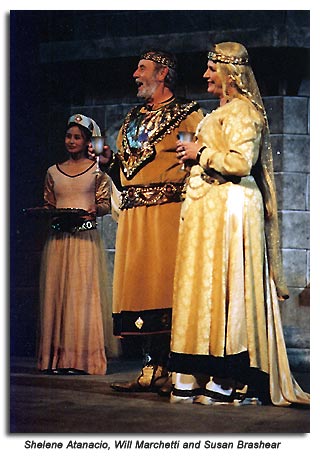 We loved working with our dear friends, real-life husband and wife Susan Brashear and Will Marchetti as Gertrude and Claudius. Thomas Lynch was exceptional as Polonius and the Gravedigger. Anthony Abate turned in one of his best MSC performances as Laertes. 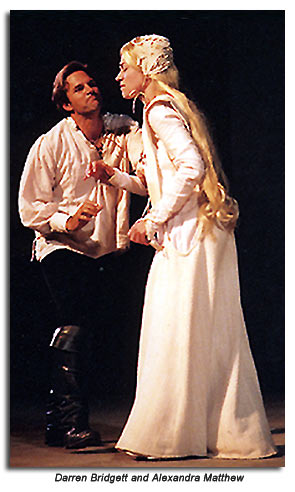 PresentingHamlet – a story about a country torn apart by untimely tragedy – during one of our nation’s darkest hours was an experience that added meaning to the play for actors and audiences alike. It taught us, once again, how Shakespeare can speak in so many ways across the ages to our deepest personal and shared challenges.

Like life itself, it is simply too big to get on top of, like Nepal’s Mt. Everest before Hilary. Yet, like George Mallory, we continue to try “because it’s there…”

So how does one prepare to go into battle with the unbeatable dragon? With courage, wonder and stamina. When Darren Bridgett, Will Marchetti, and I sat down to discuss our approach to this daunting undertaking, I realized we had over a century of theatre experience among us. 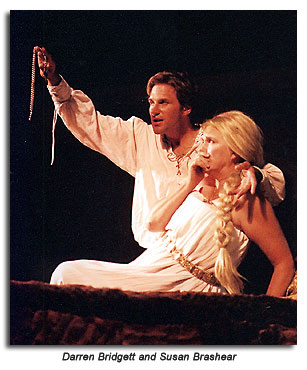 We are now in a new century and there must always be a new Hamlet. Over the last 12 seasons as Artistic Director of Marin Shakespeare Company I’ve had a number of actors volunteer to play the role. One of the much-discussed themes in this play is delay. How appropriate then that my choice for the part was someone who didn’t ask for it and was reluctant to try it. In our popular The Complete Works of Wllm. Shkspr. (abridged), the entire second act was devoted to a zany examination of Hamlet. 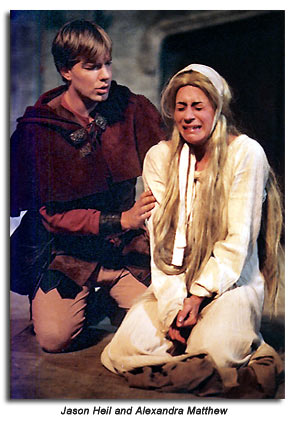 One of the trio of actors is thoroughly daunted, cowed, terrified, even nauseated by the challenge… ‘It’s so big! There are so many words!’ That actor was Darren Bridgett. He reluctantly goes along with the others and at one point in the madcap buffoonery suggest they omit the speech that begins ‘I have of late lost all my mirth…’ and in this backdoor fashion begins a recitation of one of Hamlet’s most moving soliloquies. Every night hundreds of spectators were brought to absolute rapt stillness. I knew that the clown in the orange pumpkin pants was my Hamlet.

The trick was convincing him. Hamlet-like, he delayed, knowing all too well what a challenge was being offered, saying in effect that the time was out of joint. And I understood.

“Darren Bridgett is a striking Melancholy Dane… He fills the role with the energetic impetuousness, quick-silver certainties and frayed emotions of youth not only in emotional extremis but also buffeted by circumstances forever spinning out of his control. His isn’t a Hamlet for the ages. Not all of his choices work… But even the rawness that shows through his skill at times lends an edge to his overall portrayal. This is also a ‘Hamlet‘ that demonstrates some considerable improvements at the Marin festival since it was last reviewed in these pages, three years ago. Robert and Lesley Currier’s 12-year-old company has increased the number of professional actors per show in the interim from two to a much healthier six, alleviating the festival’s long-nagging problem of one or two strong performances in a sea of apprentice work. The Curriers have also extended the stage apron over the Forest Meadows Amphitheatre’s bothersome reflecting pool… Robert Currier’s direction takes advantage of the resulting increased flexibility for some starkly intimate moments, especially during the soliloquies that Bridgett delivers with thoughtful clarity… Alexandra Matthew’s Ophelia is a stunning creation, so alive with youthful hope, fear, intelligence and newly awakened sexuality that her scenes with Bridgett burn with raw emotion, and her madness is deeply affecting.”
-Robert Hurwitt, S.F. Chronicle 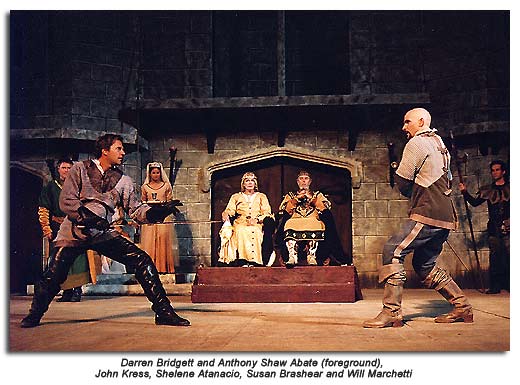 “There are several strong performances, including Anthony Shaw Abate as Laertes, Thomas Lynch as the First Gravedigger, and especially Alexandra Matthew as the emotionally fragile Ophelia, whose mad scene is a joy to watch.”
– Charless Brousse, Marin I.J. 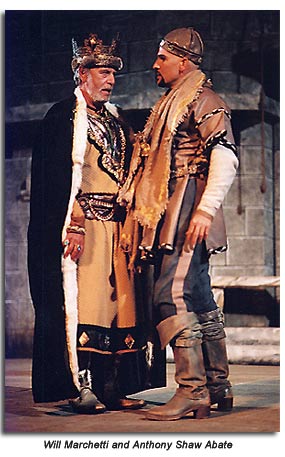 “Marin Shakespeare Company’s final offering of their 2001 season, ‘Hamlet‘, is full of the ambition Hamlet boasts of. Smoke wafts across castle walls, Ophelia plunges through a pond, Hamlet swings about the stage, furious, infuriating, and possibly demented. There is much gnashing of teeth, and beating of breasts, and juicy monologues from the tortured Hamlet…. The tragedy remains compelling, and it is clear that everyone in MSC’s show worked hard.”
– Olga Azar, Marin Scope

“Marin Shakespeare’s Robert Currier has chosen to preserve the time and historic costuming of the original…. Darren Bridgett has the title role. Previously featured in MSCo’s Complete Works of Wllm. Shkspr., Bridgett has dropped all of his comedy routines, but has retained an ‘antic disposition’ that is athletic, articulate, and appropriate to the role. Will Marchetti and Susan Brashear, a husband-wife team, are believable as ill-fated newlyweds Claudius and Gertrude. Thomas Lynch, doubling as both Gravedigger and Polonius, extracts warm humanity from both characters. Scott Coopwood assumes the three roles of Ghost, Player King and Fortinbras, giving each a different interpretation. Alexandra Matthew’s gentle Ophelia crumbles slowly before Hamlet’s destructive engine as Jason Heil’s Horatio remains a steady reminder of sanity beyond Elsinore.”
– Rosine Reynolds, Tiburon Ark 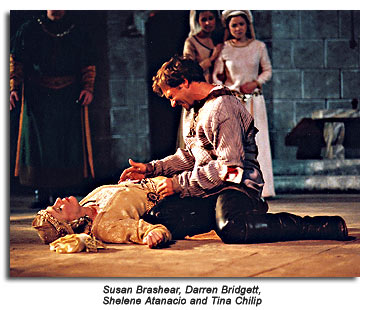 “Last Saturday night the torch was passed – literally and symbolically, as well as very theatrically – when the Marin Shakespeare Festival honored founders Ann and John Brebner at a banquet, followed by a torchlight procession with banners to the Forest Meadows Theatre…. The evening not only marked the 40th anniversary of the Festival, which with its earliest performances at the Marin Art & Garden Center in Ross became the first outdoor Shakespeare Festival in California – but was a remarkable reunion of performers and production folk from the Bay Area stages of the 60’s and 70’s…. Dakin Matthews reminisced that Russell Ernst was the Old Man of the company, self-proclaimed guardian of the Bard, when Matthews was first cast, little knowing that the mantle of irascibility would eventually settle on is own shoulders. At that, Ann Brebner recalled Dakin’s first audition, to quizzical stares on a hot summer’s day, in suit and tie with an immense complete ‘Collected Plays’ in tow – only to appear at the callbacks in shorts and shirtsleeves.”
– Ken Bullock, Commuter Times 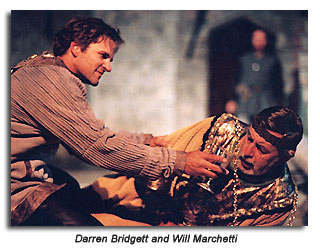 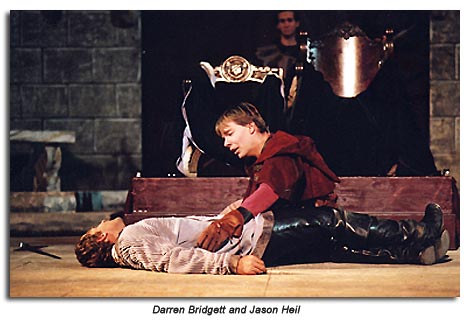 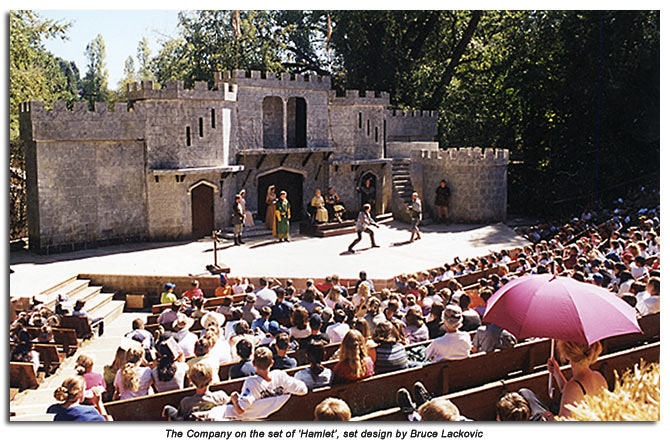