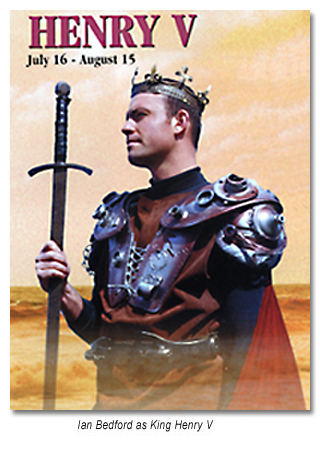 Henry V was only the second time we had attempted a Shakespeare history play. It was also our first time working with Director Jim Dunn. Jim was at that time perhaps the one person in Marin who had directed more Shakespeare productions than anyone else. As the long-time head of the College of Marin drama program and the Artistic Director of The Mountain Play, Jim had worked with and influenced just about everyone who ever did theatre in Marin. Our first season of three plays –our tenth anniversary season – with more available directing slots, it seemed a natural to ask Jim to direct. Robert Currier called him “the Pete Rose of Marin directors (Most Lifetime Hits.)”

And Jim chose Henry V. I can’t actually remember why. We didn’t have an actor lined up to play the key title role. We didn’t think it would sell a lot of tickets. It was something Jim had a passion to tackle, and we trusted his excitement. Jim served in the military in Korea, and so his understanding of men in battle runs deep. Bruce Lackovic created a stunning visual backdrop, a panorama of soldier’s faces through the ages, and discovered how to create a thrust stage at Forest Meadows that we’ve used in one way or another every year since. Rosey Bock’s costumes contributed to the eclectic every-war feel.

And at our General Auditions, as we sat watching about 200 actors come and go, in walked the perfect Henry V – the commanding, brilliant, laconic but with seething emotional accessibility, Ian Bedford. It was all we could do not to offer him the role on the spot. He didn’t even have his Equity card yet, but he was destined for greatness, and in fact has gone on to have a rich career playing lead roles at regional theatres across the country. 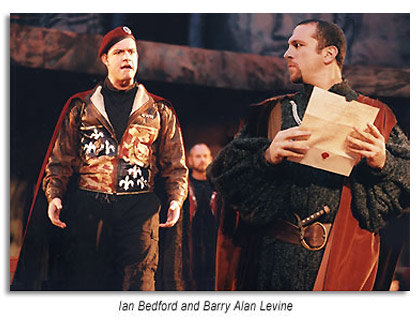 This was also the year we first met and worked with Alexandra Kuntzsch (now Alexandra Matthew), who has become one of the Bay Area’s finest leading actresses. The tavern denizens were also all standouts: Peter Schmuckal as Pistol almost stole the show, Jack Halton was the perfect Bardolph, and Marie Shell babbled beautifully of green fields as she told of the death of Falstaff. 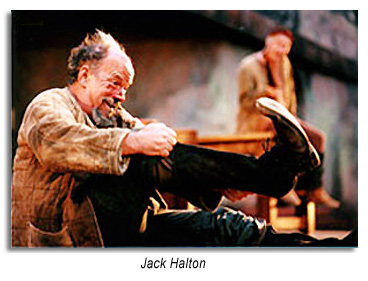 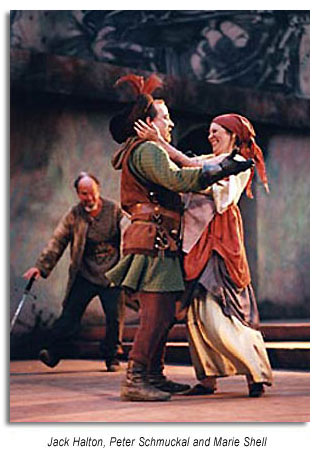 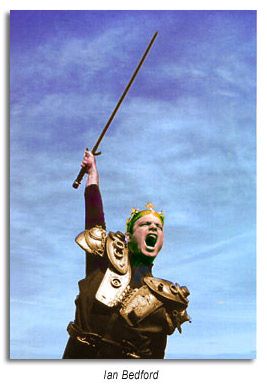 Artistic Director Robert Currier ended up pushing the huge cannon onstage each night, after he got tired of seeing it bump into the scenery – which put him in the perfect location for another key Artistic Director job, emptying the backstage trash cans into the dumpsters (“what, give up show business!?”)

Critics and audiences enjoyed the production, although they did not come out to see it in droves, proving once again that any Shakespeare play with a Roman numeral in the title is most likely not going to reap tremendous financial rewards. But, hey, if we were in it for the money, we wouldn’t be working in a Shakespeare theatre!
— Lesley Currier 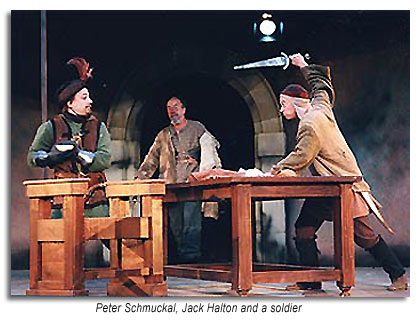 From the Playbill
I was 13 or 14 when I had my first contact with a Shakespeare play. World War II had been over just about a year when Laurence Olivier’s film of HENRY V came to Marin County. A buddy of mine had heard about the movie and said it was all about knights in armour and big battle scenes. 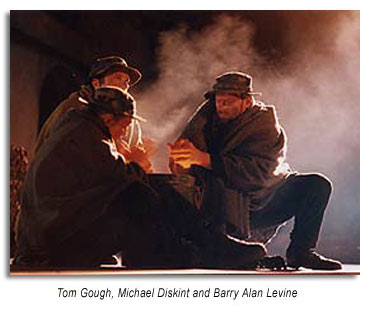 I had only vaguely heard about William Shakespeare, but there I was, sitting in the El Camino Theatre on Fourth Street in San Rafael. It took me about ten or fifteen minutes to pick up on what at first I thought was the strangest sounding English I had ever heard, but then the magic of Shakespeare took over and I was transported to the “vasty fields of France” and was totally captivated by Shakespeare the writer and Olivier the actor…. Shakespeare always takes us on a journey of self exploration and makes us face our personal battles: ‘We few, we happy few, we Band of Brothers.'”
— James Dunn 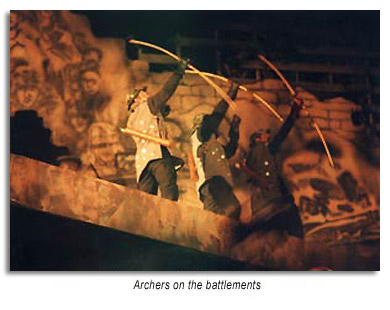 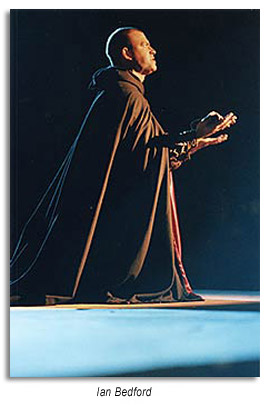 “Ron Krempetz’ [sic] skeletal set is painted with soldiers in modern uniforms. Both Rosey Bock’s spectacular costumes and Denise Kirshner’s [sic] military props are a plausible mix of ancient and contemporary military accoutrements.. .Ian Bedford – whose voice and stature easily take command of the stage – is most convincing in this demanding role…A round of applause to all.”
– Roberta Floden, Marin I.J. 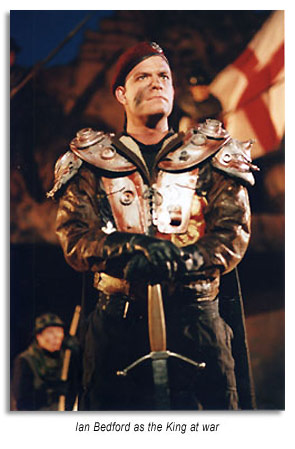 “Actor Ian Bedford creates an attractive, warm, and sympathetic young man who becomes the glorious king of Shakespeare’s imagining. Bedford, like Henry, grows in his role, and by the second act takes control of the play. He is supported by a host of good actors…Jack Halton is as religiously right as the Bishop of Ely as he is common and coarse as Bardolph; while Ian Swift as the stately Archbishop of Canterbury moves across the channel to become King of France. 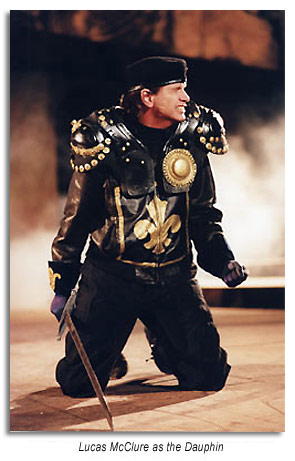 Lucas McClure is over the top as the vainglorious Dauphin, but then his character is a Frenchman written by an Englishman. Ken Rowland is strong…Marie Shell makes you wish her Mistress Quickly had more time with her raunchy barroom brothers. One character, Peter Schmuckal as Pistol, does get his share of comic moments as a boasting, cowardly lion of a soldier. His running battle with Welsh Captain Fluellan (Jeff Elam) lightens the battle scenes. Alexandra Kuntzsch and Anne Ripley, as the French princess and her attendant, make gentle comedy out of linguistic errors. And Matt Henerson, as The Chorus, keeps the audience on the scene with his clear, somewhat cynical, look at kings and commoners.”
– Lee Brady, Pacific Sun 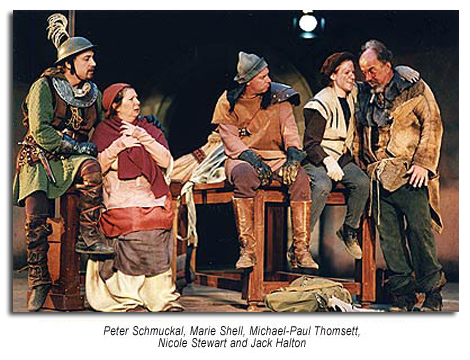 “You’ll be carried away by Shakespeare’sHenry V… Henry V, directed by James Dunn on the Forest Meadows stage at Dominican College, is extraordinary theater….The play is Shakespeare at his best, as is the cast for this production….The performance of this play was so enchanting that instead of paying attention to its subtle nuances as critics should do, I found myself watching, feeling, attending every moment of the performance without taking notes….Don’t miss it!”
– Bess Davoren, Tiburon Ark 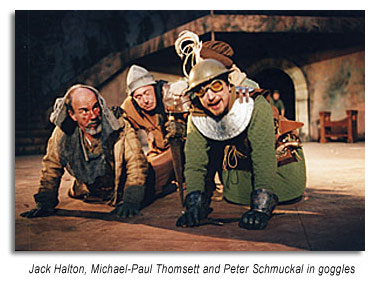 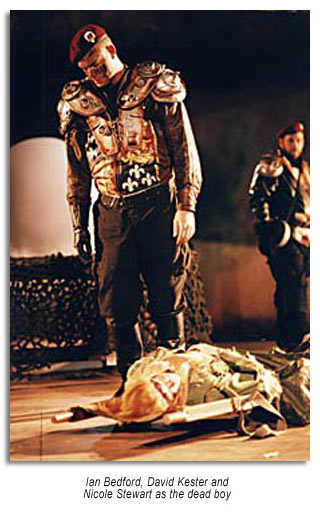 “Marin Shakespeare Company has made Henry V the centerpiece of its 10th season, and they’ve chosen just the actor to do it. Stoic to the point of ice (even in his most inspiring moments) throughout the first two thirds of the play, Ian Bedford (is that a star’s name or what?) turns into the ultimate man of peace after wooing the French princess with more charm than any one man should be allowed to display, particularly after beating the French while outnumbered 10 to one….The cast is made up of some of the best and most familiar actors in Marin.”
– Chrisanne Beckner, Commuter Times 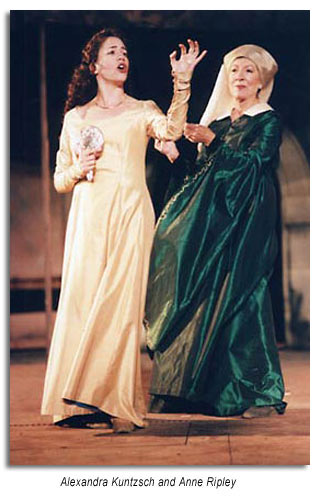 “Henry V…appears seemingly for the first time and so for all time in this production….The tension and pace of James Dunn’s directing and the heat and intensity of lead actor Ian Bedford galvanize the play with a palpable force.”
– Julia Hawkins, Bay Area Theatre Critics Circle 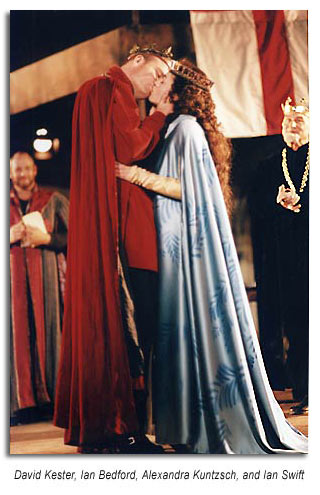