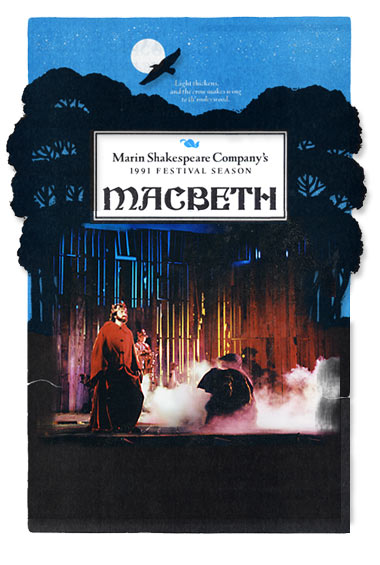 For our second season, since we had presented a comedy the year before, we selected one of Shakespeare’s most exciting tragedies: Macbeth. When the first Iraq war started, this choice – a play with some of Shakespeare’s great musings on warfare, death and bloody murder — seemed even more relevant.

We hired Guest Director Patrick Kelly from Dallas who had just had a great success at the Magic Theatre directing Man of the Flesh, and who had an extensive background in classical theatre. 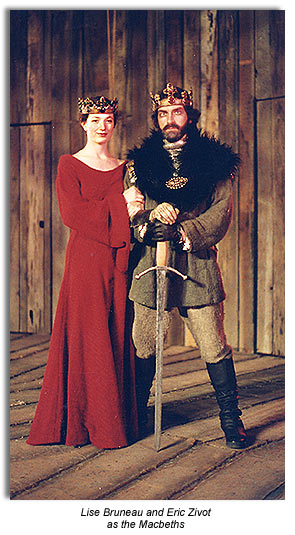 Eric Zivot, then a Voice instructor and company member at the American Conservatory Theatre, was selected to play the bloody warrior. As his cohort in crime, we chose a young actress fresh from a training program at R.A.D.A. (England’s Royal Academy of Dramatic Arts.) This young artist, Lise Bruneau, has now become one of the leading classical actresses of her generation. Lise was a sexy, passionate Lady Macbeth to Eric’s earnest, conscience-laden king. There was great chemistry onstage. We also welcomed our first child actor, Alexis Grausz, who played Macduff’s Son and an Apparition.

For our Fight Director, we chose Richard Lane, founder of the Academy of the Sword, who has directed fights at Marin Shakespeare Company now for over a decade. In fact, when Richard’s first bookSwashbuckling, a valuable primer on Stage Combat that has become a standard teaching tool, was published, he included photographs from this production.

This was also the first of many productions with the vastly talented composer and sound designer Bruce Gehrke, whose spooky “hell sounds” added an appropriately eerie element to the production.

Set and Lighting Designer Jim McKie created eerie supernatural effects for the show by designing a castle of weathered wood, through which colored lights could be thrown from the rear, while various trap doors emitted smoke, lights, hell-sounds and, of course, the three witches and their ghostly apparitions. This was also the first of many shows with costumes designed by Kim Curtis, who created bold, strikingly-colored simple designs made of rough-hewn materials that fit beautifully with the weathered set.

When the crows and bats flew overhead as the light thickened each evening, we knew we had truly entered the world of Macbeth. 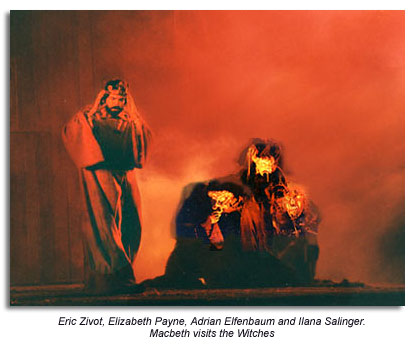 Contrary to reputation, we have found that the “Scottish Tragedy” has brought with it a wealth of good luck: a nationally-recognized director, a talented and experienced cast, and the return of set and lighting designer Jim McKie who heads up a production team delighted to conjure all the eerie special effectsMacbeth allows….We are grateful to the outpouring of community enthusiasm which has greeted the revival of Shakespeare at Forest Meadows, and to the warm response generated by last year’s premiere production,As You Like It. We would like to thank everyone whose energy, enthusiasm and generosity has sustained the Marin Shakespeare Company and especially our major corporate donors, Fireman’s Fund Foundation, Crystal Geyser Water Company, and Calasia Restaurant, whose invaluable support allows us to once again share with you the poetry and magic of ‘Shakespeare Under the Stars.’

“Enchanting Macbeth in Marin: There’s nothing quite like watching Shakespeare under the stars. And seeing the Marin Shakespeare Company’s production of Macbeth at Forest Meadows theatre is truly spellbinding.…a poetic and eerie production that seems to take in the night. Thunder and lighting, smoke and blood, excellent sword fighting, and the sounds of birds at dawn are all brought to Dominican College as if imported from Scotland itself. The acting is exceptional. ACT’s Eric Zivot, who plays the lead, performs Shakespeare as if he were born to do it….Lise Bruneau…is at once beautifully tragic and lustfully evil.”
Shawn Connally, Marin Independent Journal 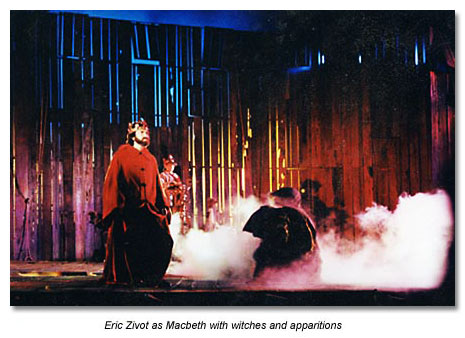 “At a running time of two hours with no intermission, the Marin Shakespeare Festival’sMacbeth is a swift, propulsive account of the tragedy. Capably played by the principals and directed by Patrick Kelly with an eye and ear for the big impact, the production fills the night air at Dominican College’s Forest Meadows Theatre with a rough-hewn poetry.”
Steve Winn, San Francisco Chronicle