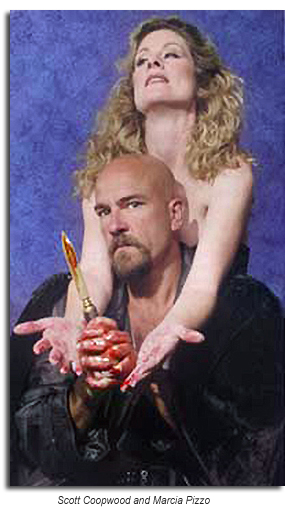 We can count on one or two hands the times an actor has walked into our auditions and so blown us away that we instantly fell in love. Having fallen in love with Scott Coopwood’s intense energy and talent at the previous year’s auditions, we searched for a project that would showcase his skill. This was a production chosen for a specific actor, and we wouldn’t announce Macbeth as part of the season until Coop had agreed to play the role.

The auditions for Lady Macbeth were fierce. Marcia Pizzo walked away with the role, having proven once again why she is one of the Bay Area’s finest and most versatile – as well as most gorgeous and likable – actresses. And the duo was dynamite. Marcia and Coop tore up the stage with their passion. 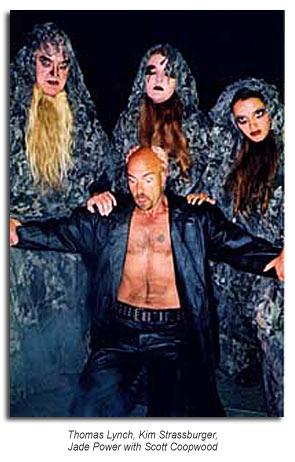 Fight Directors Richard Lane and John Ficarra outdid themselves. We spent many hours rehearsing the fights, including a massive opening melee that set the scene for the internal and external battles to follow. More than any other show we’d ever done, the actors ripped their costumes to shreds, with our backstage crew furiously patching and sewing almost nightly. 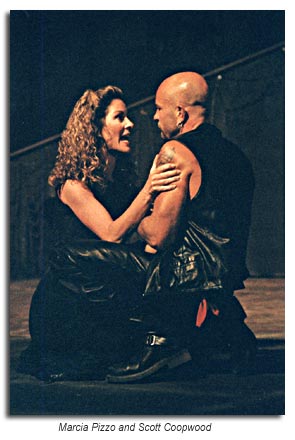 Inspired by the severed heads on pikes we knew would have greeted visitors to Elizabethan London after many a public hanging or quartering, we had the idea to have ghostly heads appear on the ramparts as the onstage killing spree progressed. The multi-talented Bob Cooper created life casts from our actors as the technicians figured out creative ways to make the heads appear as the murders piled up, along with the Macbeths’ guilt. 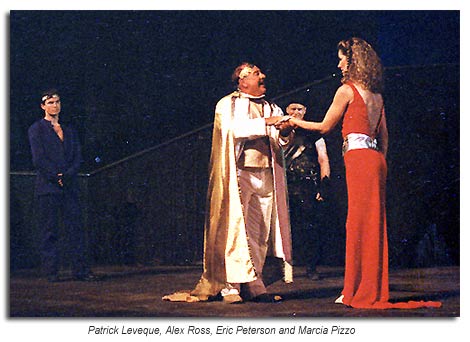 It was a fierce, gritty and passionate production, an exploration of the darkness of the human soul. 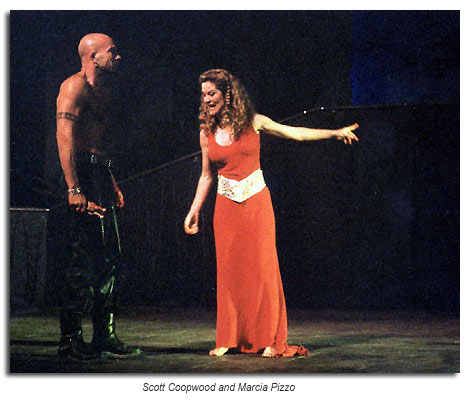 To paraphrase Maria’s letter to Malvolio inTwelfth Night: “Some are born, evil, some achieve evil, and some have evil thrust upon them.”

What is evil? From whence does it come? What are the factors? Who knows the formula for the diabolical? No one. Hence the fascination with biographies of serial killers, African dictators, and Adolf Hiter. Indeed a friend of mine refers to he History Channel as the ‘Hitler Channel,’ so frequently are stories about Der Fuhrer with black and white footage of the nefarious Nazis aired on that channel. 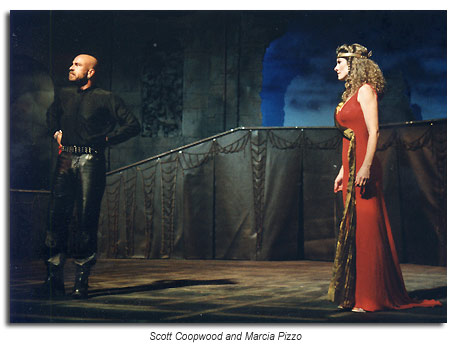 Certainly Shakespeare was interested in the question, as philosophers have been for centuries and as all great dramatists must be. Iago, Richard of Gloucester, Edmund the Bastard – to name a few – are no sweethearts. But in no other does Evil, with a capital E, so predominate as inMacbeth. Indeed, the elements of evil, the three weird sisters, are the first thing we see on stage, picking over the corpses on the still smoking battlefield, severing body parts for their potions and planting the seed of evil in the courageous and newly victorious Macbeth as Banquo, his comrade-in-arms, watches and listens in horror and fascination. The loyal general, “too full of the milk of human kindness” is infected. 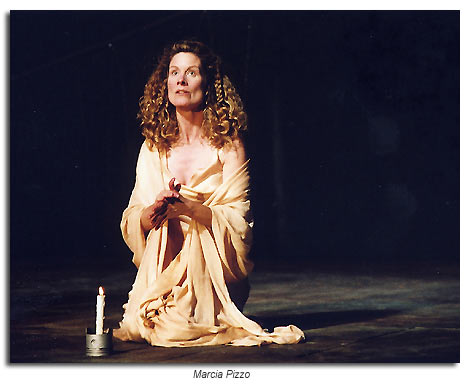 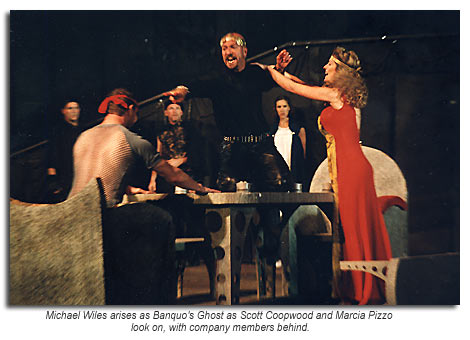 “Shakespeare’s story of psychotic Scots is action-packed as ever…Macbeth isn’t only Shakespearean literature, it’s also the 15th century equivalent of an action thriller; director Robert Currier pushes the mayhem to the max. Pamela Johnson’s street punks-meet-The Matrix costumes create a timeless air; Bruce Lackovic’s dark set is absolutely foreboding. Standouts include Michael Wiles as Banquo, John Ficarra as Macduff, Mike Reynolds as Angus and Robert Garcia as Fleance. The real stars are the versatile Scott Coopwood as Macbeth and the stunning Marcia Pizzo as Lady Macbeth. The two professionals – both are members of Actor’s Equity – bring a passionate intensity to their shared madness. A more malevolent or more attractive pair of conspirators has rarely graced the stage…MSC’s Macbeth is a show well worth seeing – perhaps repeatedly.” 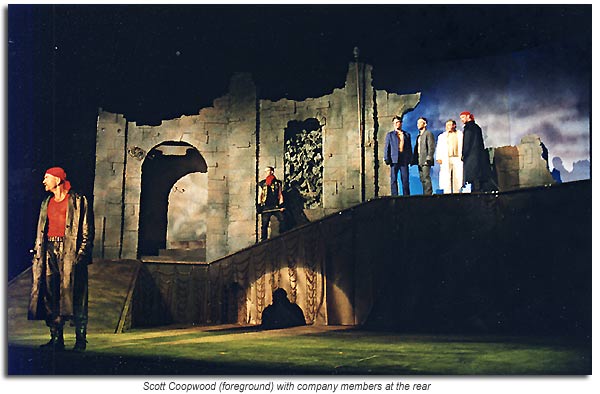 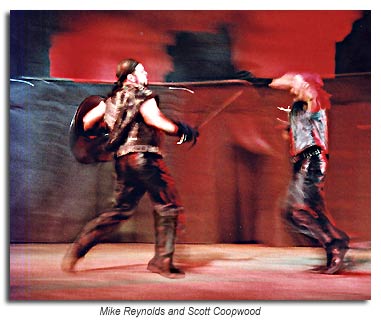 “There is a feeling of hyperactivity about the show, beginning with the furious opening battle scene…Scott Coopwood (Macbeth) is a whirlwind of nonstop activity…As Lady Macbeth, Marcia Pizzo is sleek and sexy…In a capable ensemble, two actors playing minor roles, Reed Harvey (multiple characters) and Nancy Kelly (a Gentlewoman), stand out for their assured stage manner and exemplary vocal projection.” 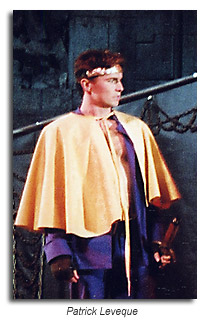 “While Scott Coopwood and Marcia Pizzo present an evil enough duo of Macbeth and Lady Macbeth, they have a very human side, which draws the audience’s sympathy as well as the horror. While both are eager for power they are not unaffected by the evil means they use to acquire it. Both suffer greatly from guilt in their individual way.”

“Director Robert Currier prods the action to a furious pace from the eerie appearance of the witches in the opening scene, through clanging swordplay to the murderous climax… The amphitheatre, surrounded by woods, is an especially fitting place for this dark play. The setting should be particularly appealing in the moonlight of these next two weekends. And the outdoors makes the movement of Birnam Woods – real tree branches – toward Dunsinane castle in the darkness seem not only real, but freak-out spooky.” 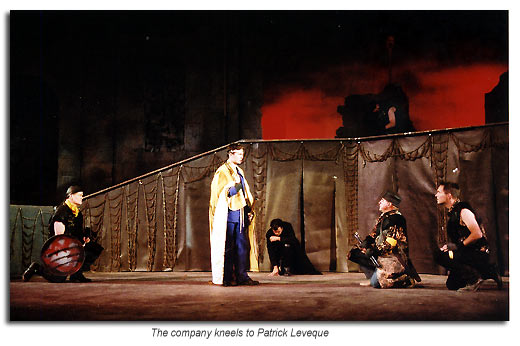 “Their amphitheater setting and lengthening nights provide a perfect backdrop for the murky castle, the heath, even for Birnan Wood…Exuberant fight scenes, directed by John Ficarra, are beautifully staged, as is the domestic squabble between the Macbeths.”