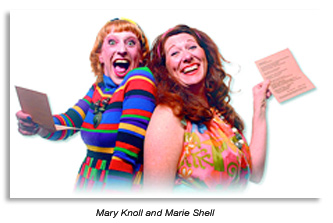 As popular as Merry Wives is, neither Bob or I had ever been involved with a production when we decided to put the play on at Forest Meadows. So…we gave ourselves a bit of an out-of-town tryout by taking the show down to Baja where we put on The Merry Wives of Windsurf. Bob and I played the Fords and co-directed, our set was a couple of surfboards and some colorful windsurf sails, and we learned quite a bit about the rhythm of the action and how an audience reacts to the play.

We also stole a few of our own ideas for our Marin production: Anne Page in a bikini, the Pink Panther theme for the “sneaking” scenes leading into Herne’s Oak, and a general irreverence and devotion to local humor.

Setting the play in 1970’s Marin worked like a charm. We snuck every icon of Marin’s suburban-hippie heyday into the production from a peacock feather massage by a hot tub, to a roach-popping Mistress Quickly, to a love-bead-clad minister conducting the wedding ceremony. Herne’s Oak became a disco where the wives fed Falstaff LSD to send him on his bad trip. The audience loved it – from the giant beaded curtain on the set (which I somehow ended up stringing myself) to the bell bottom pants. 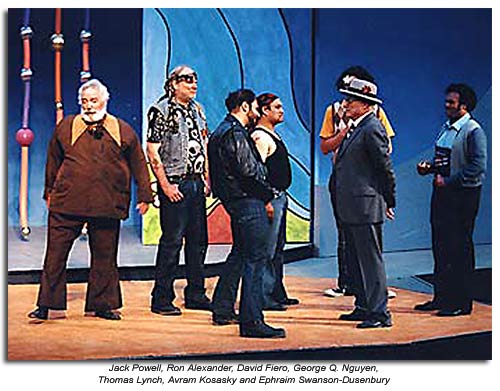 We had a wonderful cast for the lead roles. Jack Powell, who had played Jack Rugby in the Marin Shakespeare Festival production of the 1970’s, was a very funny Falstaff. Mary Knoll and Marie Shell were fantastic wives. Darren Bridgett was perfect as Ford. Rudy Guererro was a hilarious Dr. Caius. And Phoebe Moyer was a wonderfully stoned Mistress Quickly. We had a bunch of kids playing the kids and they all had a great time learning disco moves from Choreographer Cynthia Pepper beneath Ellen Brooks’ colorful lights. As Fenton might have said, it was “righteous!” 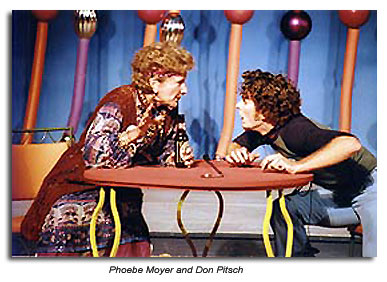 “Merry Wives, Shakespeare’s only comedy set exclusively in England, is full of local references to contemporary events and people — it is a middle class comedy set in the Queen’s backyard, the town of Windsor. Taking our cue from this, we have placed our production in Marin County and localized some of the place names and other references. Purists, beware! 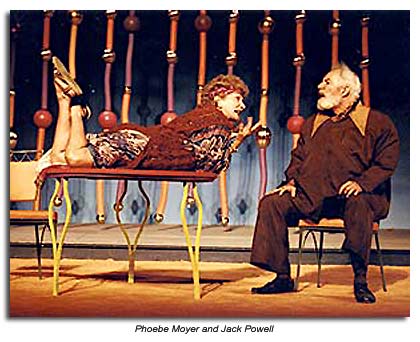 In choosing an era best fitting the irresistible gaiety of this farce, we arrived in the 1970’s, back when Marin became the home of the hot tub and the human potential movement as chronicled in Cyra McFadden’s best-selling parody, The Serial — a decade of excess and pretense in an affluent suburb analogous to the Windsor of the Fords and Pages and ripe for the free-loving schemes of Sir John Falstaff.

So return with us now to the days of yesteryear, before the internet, AIDS or political correctness…a more innocent time of flower children, leisure suits and the first pulsing beat of disco…a time when all things still seemed possible. What were you doing, wearing and listening to 25 years ago? What a long strange trip it’s been!” 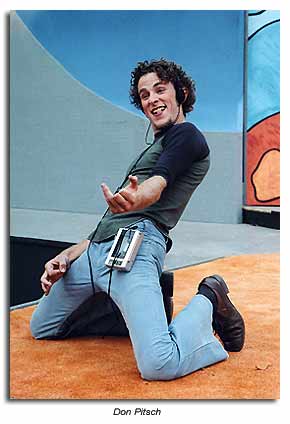 “It’s a fairly impressive opening gambit. With ‘Don Juan‘ and ‘Merry Wives‘ running in repertory, the North Bay’s primary Shakespeare festival has launched the strongest of its seasons. And with the San Francisco Shakespeare Festival suffering from several years of artistic doldrums, Marin is making a strong bid to be considered the principal second-tier Shakespeare company in the region – just below the rarefied strata occupied by the California Shakespeare Theatre and Shakespeare Santa Cruz…An upbeat show…[Robert Currier] applies his updated localized concept well and consistently…and uses his stronger actors to carry the show…Mary Knoll and Marie Shell are wonderfully spirited, mischievous matrons as the wives, Mistresses Ford and Page, and Darren Bridgett concocts hilarious paroxysms of jealousy as Master Ford.”
– Robert Hurwitt, San Francisco Chronicle

“You an almost smell the liquor on his [Jack Powell’s] breath and the sweat dripping from his pores as his body dribbles around like so much under-gelled custard…Even more impressive are the facial calisthenics delivered by Bridgett and Knoll…As the campy French doctor, Caius, Rudy Guerrero squeezes a lot of guilty-sounding laughs out of his character’s bisexual leanings. But the production’s very audacity is also one of its greatest strengths…Marin Shakespeare has probably captured the ultimate essence of the play.” 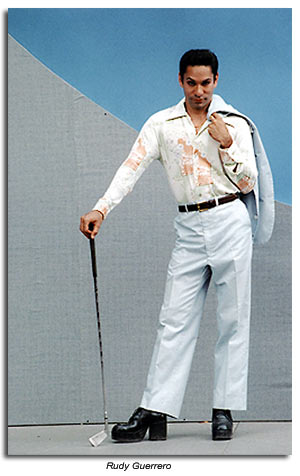 “MSC is ‘Merry‘ indeed….It’s a brilliant idea, setting the lascivious comedy in the notoriously liberal era, when sexual exploitation and neon colors were all the rage. The clever adaptation incorporates lines from Shakespeare to insinuate double meanings, gold transformed into offerings of the other, green gold…Most of the players in ‘Merry‘ are scintillating…Darren Bridgett as Master Ford dominates the stage, spluttering his jealous discontent with gusto. His performance carries the show, his antics reminiscent of another Marin standup comedian.”
– Olga Azar, Marin Scope 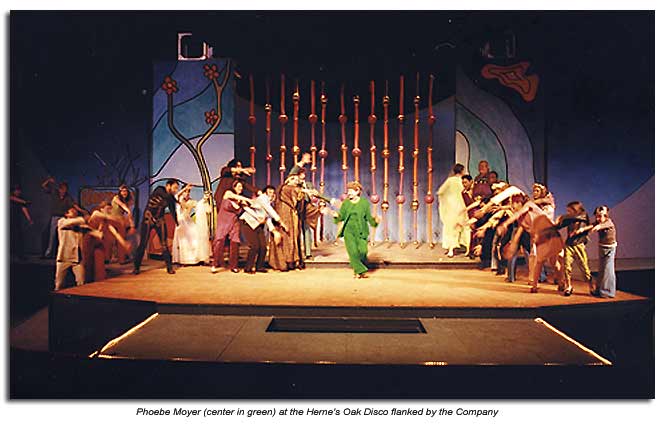 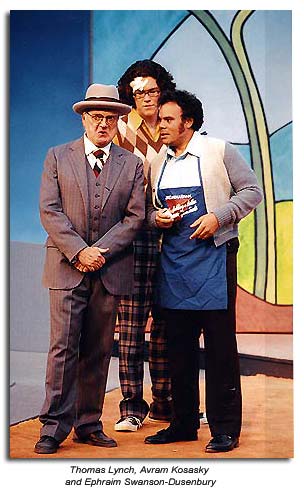 “Mrs. Ford is carrying a bag from Neiman Marcus, and Mrs. Page is holding one from Birkenstock. Here too are Sir John Falstaff, a ‘grand personality’ in his brown leisure suit and the French dandy, Dr. Caius, sporting a chest full of gold chains…Phoebe Moyer creates a splendidly ’70’s rendition of Mrs. Quickly…seductively lounging across a table or sharing a smoke…The acting’s good, the setting’s wonderful, the dances are fun and the ’70’s adaptation is groovy. You’ll enjoy theMerry Wives, even if Shakespeare isn’t your bag.”
– Rosine Reynolds, Tiburon Ark 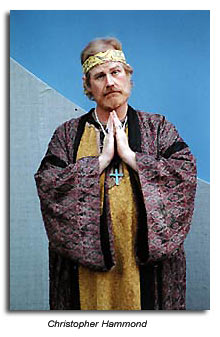 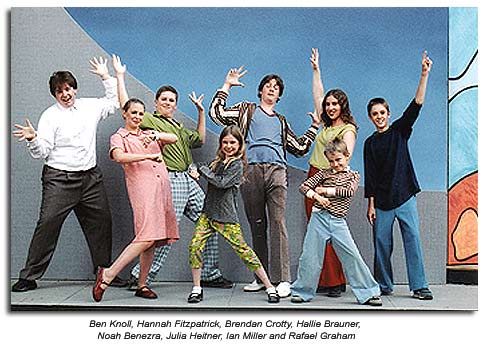 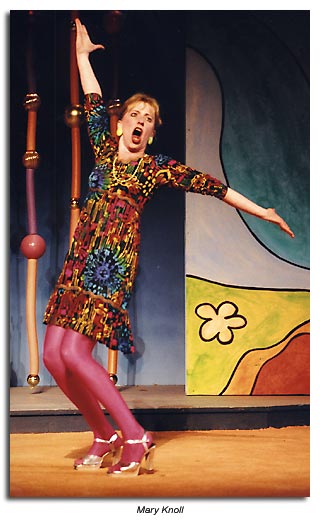 “Throughout the play, the entire cast moving and dancing in rock and roll and disco rhythms readily imparts their frolicsome fun to spectators. Jack Powell creates an authoritative and pompous Falstaff. Phoebe Moyer is a swinging ‘hip’ Miss Quickly, spouse finder. Mary Knoll and Marie Shell are fun-loving Marin women libbers. The rest of the over 20 member cast come through with flying colors in succeeding to create a spirited staging.”
– Annette Lust, Bay Area Theatre Critics Circle 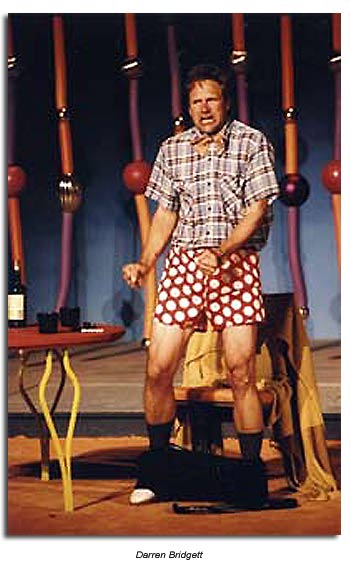 “The Marin Shakespeare Festival farce is part Marx Brothers, part camp, part Three Stooges and much slapstick…As good as Jack Powell is, it’s Darren Bridgett who steals the show as the maniacally jealous husband of Master Ford. As the imaginary cuckold husband, this actor bequeaths a fine bottled up hysteria that is a tour de force…Phoebe Moyer is outstanding as the jive pothead Mistress Quickly…The night that I saw the production the fine actor Thomas Lynch who plays Justice Shallow was in the hospital. Director Robert S. Currier took over the role with script in hand. For a novice he did quite well – and his fast pace direction of the farce is right on the mark.”
– Richard Connema, Talkin’ Broadway 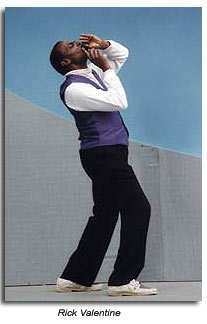 “You ought to see this one. Put simply, it’s hilarious…wickedly funny.”
– Robert Lee Hall,Piedmont Post 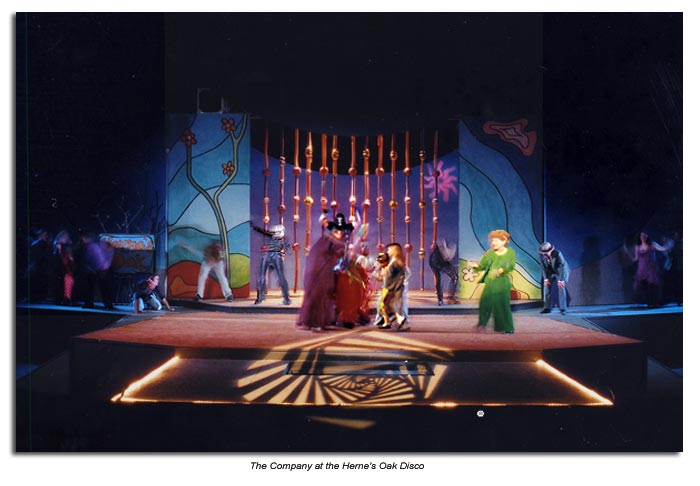 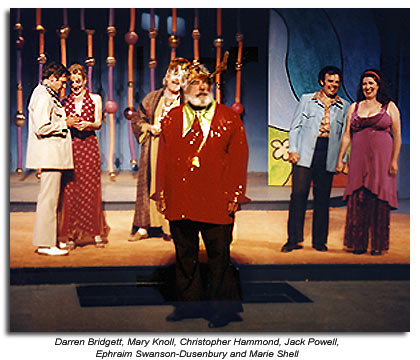 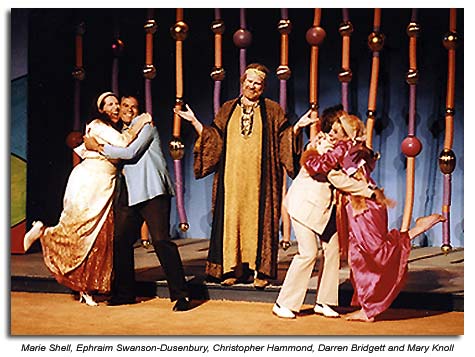