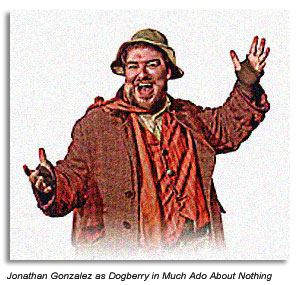 Much Ado About Nothing was one of the first times we had re-mounted, in a totally different production, a Shakespeare play we had previously produced. It is a play that relies heavily on the chemistry between the leading characters. Our 1995 production had featured real-life husband and wife Ken Grantham and Kimberly King. This production brought together the powerful wit of Scott Coopwood with the elegant strength of newcomer Susan Wilder. And the production worked beautifully.

The second set of lovers, Hero and Claudio, were played by Laurie Keith and Patrick Leveque who are (as I write this in 2007) now engaged to be married. Robert Currier took on the role of Leonato, presiding over the onstage villa, while he presided as Artistic Director over the company. John Ficarra – who sadly moved to New York the following year, depriving us of his many talents – was a wonderful Don John. Jonathan Gonzalez and Thomas Lynch as Dogberry and Verges kept the comedy of the subplot alive. 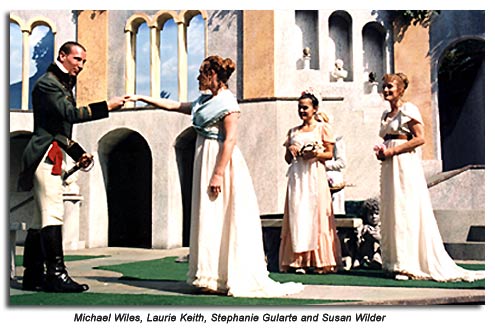 Jim Dunn decorated the set with busts of Shakespeare, discretely tucked into the villa’s nooks and crannies, as well as a foursome of little girls who gamely and played living statues which moved slyly around the stage, witnessing and commenting on the action with their poses. Fortunately, our choreographers had tremendous patience, as well as grace and wit.

Bruce Lackovic was at his creative best in conceiving a set that worked incredibly well in repertory for an Italian villa and an Arabian palace. Cleverly placed swathes of green Astroturf around a working fountain came up from the Much Ado stage floor to reveal a gorgeous mandala, and stately planters and elegant potted trees were replaced with colorful billowy curtains.

We were much pleased with this Much Ado.

Beatrice and Benedick are akin to Spencer Tracy and Katherine Hepburn in films like Adams Rib or Hepburn and Cary Grant in Philadelphia Story. More recently perhaps, Julia Roberts and Hugh Grant come to mind. We as audience members can’t help falling in love with them and so enjoy the comic and tender ride they take us on during the course of their journey. 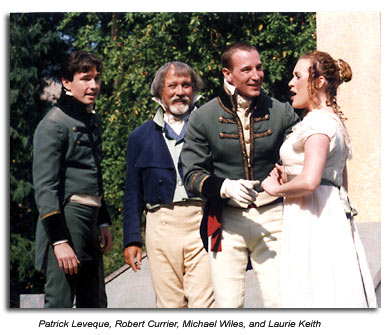 Surrounding Beatrice and Bendick, Shakespeare gives us a second set of young passionate lovers, inept villains, and a group of bumbling “Keystone Cops” who inadvertently resolve the conflict of the plot. But it is the ebullient, dashing, but flawed Benedick and the strong-willed intelligent and beautiful Beatrice who carry the day and our hearts. 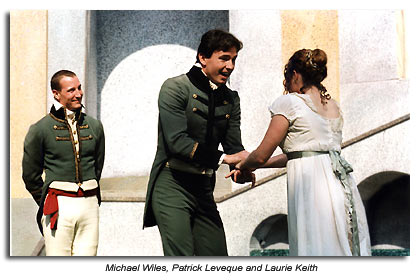 “Much Ado About Nothing is quite simply the best Shakespeare you’ll see this summer. James Dunn directs with a relentless attention to detail, which means there are neither small parts nor small actors in this lavish romantic comedy. Scott Coopwood’s rough but witty soldier, Benedick, and Susan Wilder’s swoony but sharp Beatrice are a couple out of a Shakespeare groupie’s dream; watching them being dragged by their tongues into marriage is a trip…Young Hero (Laurie Keith) and Claudio (Patrick Leveque) are less verbal but their love-at-first-sight romance is accomplished with a great deal of passion… Dunn’s balanced production allows each actor to look good in his/her role… Set designer Bruce Lackovic uses colors and columns for a charming and sensual background, but it is his clever ramps that allow actors to show off acrobatic skills. Costumes (Andrea Huelse), sound (Billie Cox), props (Denise Kirchner) and lights (Ellen Brooks) serve the overall production well. Choreographer Cynthia Pepper creates winning movements for four young stone cherubs that anchor the show.” 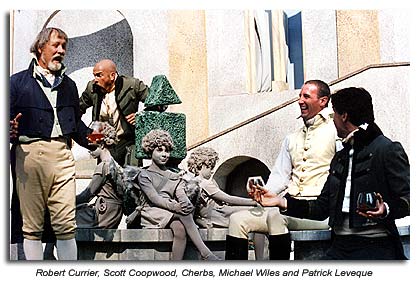 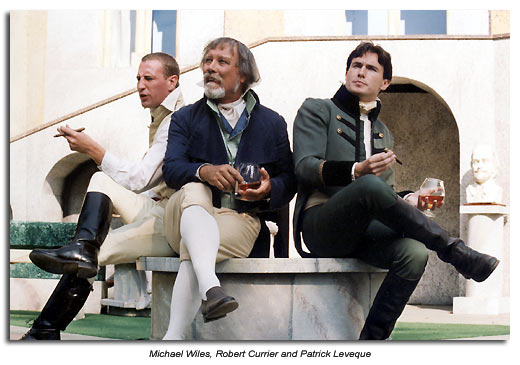 “…energetic and entertaining….Director James Dunn pushes the show along with his hallmark crispness and emphasis on broad characterization. Sometimes it works brilliantly, particularly in the scenes involving Constable Dogberry and his rustic assistants….When all is said and done, the result is a merry night of theatre under the stars…. 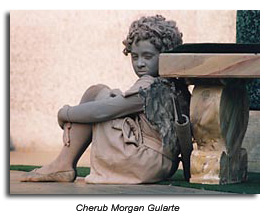 One nice scenic touch that bears mentioning is the use of child actors as live statues — silver-grey cherubs — whose shifting poses frame the action….Welcome, all, to the world of professional theatre!” 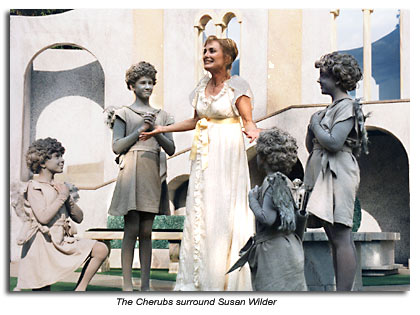 “Susan Wilder is perfectly saucy as Beatrice, and Scott Coopwood uses his acting and physical talents to terrific effect. One of the benefits of MSC’s summer seasons is the casting. Both Wilder and Coopwood appear in “A Thousand and One Arabian Nights”, which is running in repertoire with “Ado.” In “Thousand,” they carry very different roles, proving their versatility….What is most apparent in the show is the relish the actors have in their roles. 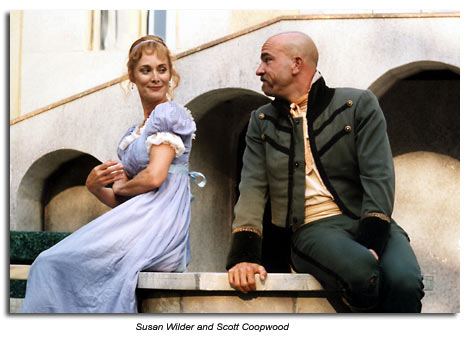 Patrick Leveque as Claudio and Michael Wiles as the Prince, both boldly cinched in tailored costumes, display a braggadocio fitting their roles. John Ficarra, who plays the evil brother Don John, was greeted by hisses when he took his bows at a recent show – telling proof of his convincing mettle (which he obligingly returned to the audience.) Directed by James Dunn, this “Ado” is charming, well cast and sumptuously costumed. An added delight are the four tiny cherubs who adorn the stage, sometimes slyly participating in the lovelorn action….“Ado” is a whole lot of fun, the staging and costumes pleasing.” 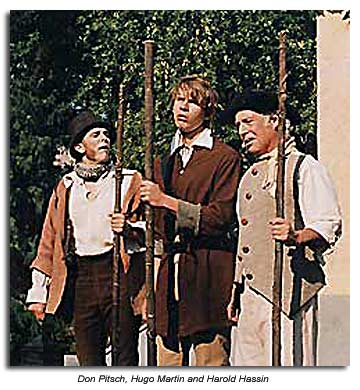