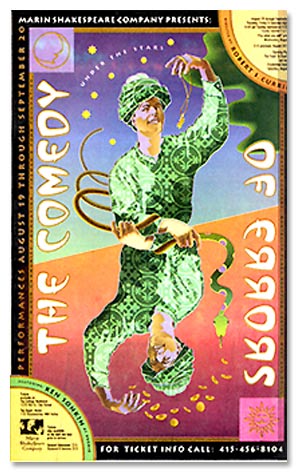 This was the first year Robert Currier assumed both the title of Artistic Director and the direction of the summer’s production. Bob chose one of Shakespeare’s goofiest farces and set it literally, but exaggeratedly, in the Turkish city of Ephesus.

In synch with Shakespeare’s overly exuberant script (where, for example, he added a second set of twins not present in the story that serves as the play’s source), the costumes and sets were overly colorful and fanciful, with glittery striped fabrics and outrageous turbans and a steeply raked two-story set representing streets lined with shops, houses and a church built in a forced perspective. Jim McKie and Kim Curtis worked brilliantly together, and as a bonus, Kim enlisted her brother David, a Clio award-winning graphic artist, who gave us our first full color poster design. 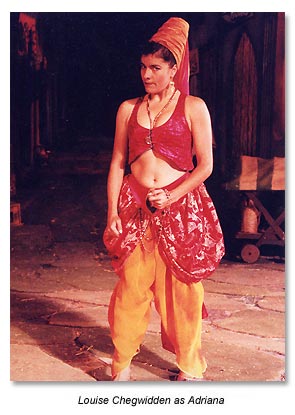 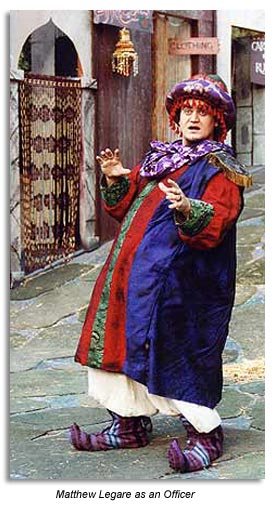 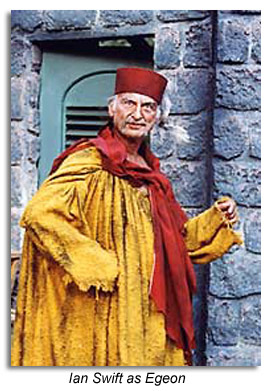 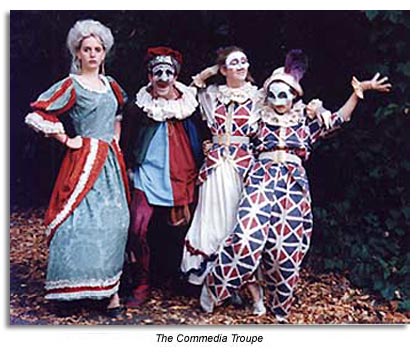 Sixteen teenage apprentices were merchants, hucksters and other denizens of Ephesus’ marketplace.And some real magic was added to the works by Ken Sonkin – not only a wonderfully talented actor, but also a professional magician.

Ken played both of the Dromios and his post-intermission magic act, when Dromio of Syracuse found a basket left by the town’s resident snake charmer which contained all sorts of mysterious devices, was a highlight of the show. 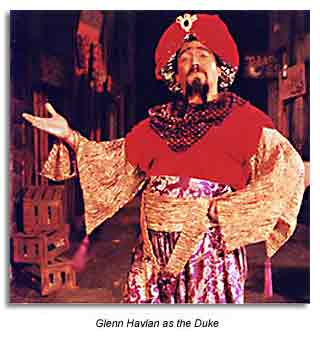 Unfortunately, some of the critics didn’t realize that Ken Sonkin played both of the Dromios and Paul Sulzman both of the Antipholi.  We realized (too late) that the fake names inserted in the playbill were perhaps not the best idea, and that perhaps the production had succeeded too well in its overly playful exaggeration of mistaken identities.

“We are delighted to bring you Shakespeare’s only true farce, the wacky, wonderful, riotous celebration of buffoonery and confusion, The Comedy of Errors. This production marks the realization of one of our original goals: the creation of a summer apprentice program for emerging theatre artists….In addition to our apprentice program, Marin Shakespeare Company offers several other special events and outreach programs. This summer we will present four free pre-show conversations with scholars and company artists. In September we offer two special performances for high school students. New programs this year include a Young Audience Access Program and a signed performance for the hearing impaired. The revels of The Feast of Good Will, our outdoor Elizabethan banquet in celebration of Opening Night have never been better….So get set for a madcap romp with some of Shakespeare’s most outrageous and loveable characters as you enjoy “The Comedy of Errors.” 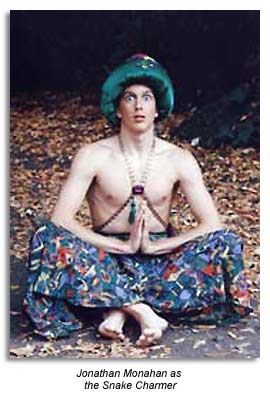 And the numerous updated sight and sound gags work, even though you think they shouldn’t – everything from the “Twilight Zone” theme to the standard football charge, issued from a minaret to call to the faithful to the morning prayer….a visual feast so broad and complex that nobody could hope to take it all in. There are magicians and snake charmers, fishermen swallowing anchovies, merchants hawking their wares, con men playing curbside shell games, muggers and pickpockets, even a flying carpet that really works….By the time the enormous cast stages its climactic chase scene through the twisted streets and doorways of Jim McKie’s spectacular village set, the audience is howling uncontrollably.”
Peter Magnani, Pacific Sun 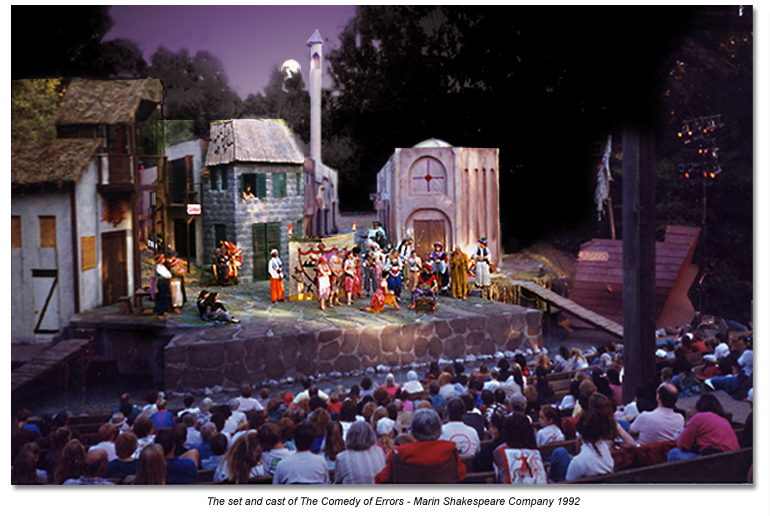 “Fresh, fast and funny theatre – that’s what the Marin Shakespeare Company is offering in their spirited production of The Comedy of Errors….Robert S. Currier has produced a swift paced and humorous rendition of Shakespeare’s first play with a cast of talented performers….Jim McKie has created a handsome set that allows all of the action and comedy to be seen at its best.”
Al Burgin, Commuter Times 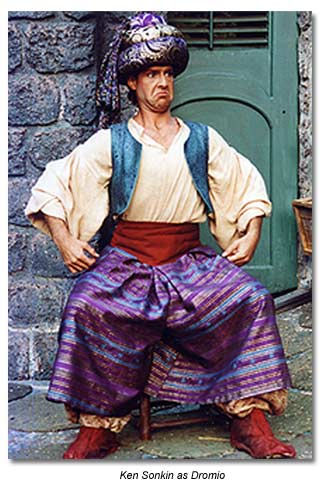 “This production should remove anyone’s misconception about the difficulty of Shakespeare….The cast throws itself into a madcap pace and…makes playing Shakespeare look fun.”
Julia Hawkins, The Gazette

“The impressive set….all of the actors with speaking parts are not only professional, but good in their roles. Paul Sulzman as Antipholus is excellent….Ken Sonkin is a fine Dromio. His athletic skills are breathtaking – downright frightening at times….Jim McKie is most enjoyable as Dr. Pinch….The costumes, designed by Kim Curtis, add to the color and excitement, and so does the music composed by Bruce Gehrke and Dana Mandell. Taken as a whole, this is a commendable production with a spice to it that many should find most enjoyable, even children.”
Bess Davoren, Tiburon Ark

“There’s a peculiar provincial charm to the Marin Shakespeare Company’s setting of The Comedy of Errors, probably in keeping with the spirit of the play’s Elizabethan debut….sweet in its simplicity and the picturesque set design by Jim McKie, and fluffy in its crowd-pleasing exploitation of sound effects, modern musical themes and quotes….Although I question the wisdom of casting Angelo, the goldsmith, as a flaming Turkish take on Little Richard, I must admit that B. Chico Purdiman carried off the camp with delightful abandon.” Jeff Kalis, Marin Independent Journal

“not-to-be-missed theatrical event….an abundance of extraneous and anachronistic schtick – and it all works….much applause to the Marin Shakespeare Company for creating the kind of production – a high-energy, theatrically effective production – that makes this silly play soar instead of sink.”
Roberta Floden, Marin Scope