by Long, Singer and Winfield 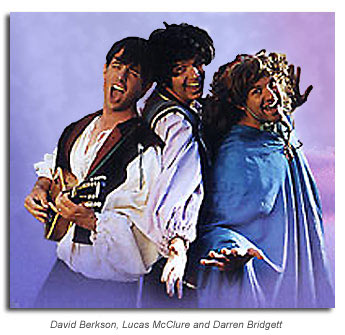 Perhaps we cave in too much to audience pressure, but when people kept begging us to bring back Complete Works one more time, it was impossible to resist. The show was so much fun for the actors, the audience, the backstage crew who helped make all the quick costume and prop changes look so easy. Our kids loved it. Our neighbors loved it. Our bank teller loved it. The brilliance of the script did not lose its luster. We could have run this show forever. Actors were clamoring to be the new ‘new guy’ in it, along with three-timers Darren Bridgett and Lucas McClure. But we did – after this, the third consecutive year – put our collective high-top-clad feet down and insist on moving along to some more serious Shakespeare (it’s the funniest stuff, after all.) From Complete Works in 2000…to Darren Bridgett as Hamlet in 2001. Kudos to Robert Currier for taking artistic risks!

From the Playbill
Three guys try to perform all of Shakespeare’s plays in under two hours – with hilarious results. “The funniest play of the year…” “…undeniably one of the funniest shows to ever hit a Bay Area stage.” “Hurry, this show will soon reach cult classic status”! Back by popular demand and NEW for 2000. No prior Shakespeare experience necessary!