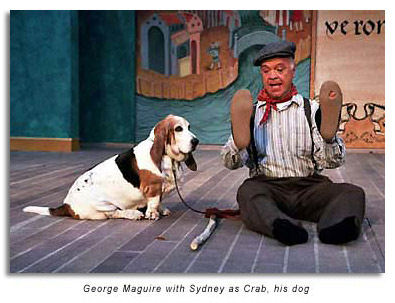 Two Gentlemen of Verona is one of Shakespeare’s earliest comedies, with foreshadowings of greatness to come. It is a play with a notoriously tricky ending — the main romantic lead, upon learning that his best friend has betrayed him by wooing his beloved while having him outlawed, forgives his buddy and, in a show of generosity and beneficence, offers the beloved’s hand in marriage. Director James Dunn solved this problem with a combination of judicious cuts and a superlative cast of young lovers who, with their wonderful reactions, made the scene into the comedic climax that Shakespeare intended.

All in all, it was a dream cast — from the awesome assemblage of Bay Area Shakespeare veterans all the way down to Sydney J. Longfellow as Crab, the dog. The production was given a Felini-esque treatment with early 1960’s costumes, a moth-eaten troupe of clowns, and a classic Vespa driven by, of course, Speed. This lightness allowed Shakespeare’s frothy story to work upon the audience’s senses like a bottle of sweet champagne. From the first moment through the giddy curtain call dance to “Volare” ably choreographed by Cynthia Pepper, this potentially difficult show proved to be a fun audience pleaser. 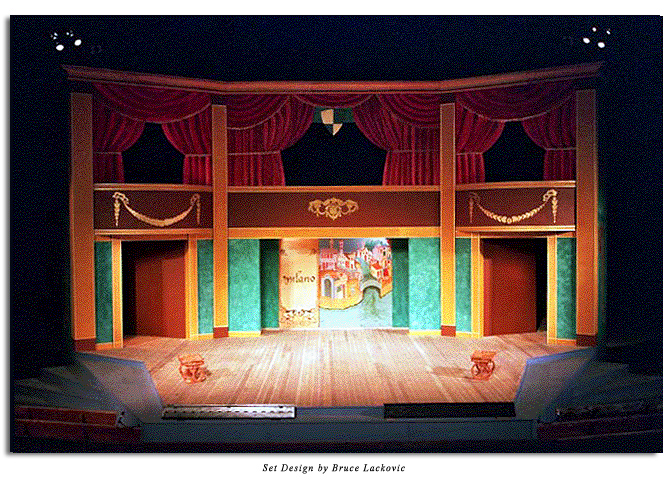 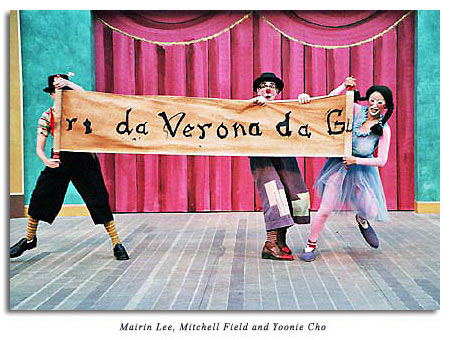 Two Gentlemen of Verona is a very early comedy most likely written in the mid 1590’s. It seems to be the young Shakespeare’s first attempt to write romantic comedy. It is a play about falling in love, fast friendship, friendship betrayed and, finally, reconciliation that is both disturbing and perhaps all too true to youthful passion.

As I was studying the play before starting rehearsals, I was struck by how many of the characters and situations in the play seem to be the genesis of things developed more fully in later stories. Julia and Sylvia in Two Gentsseem to be early versions of Viola and Olivia in Twelfth Night. Julia dons the clothing of a young man and calls herself Sebastian; inTwelfth Night Sebastian is Viola’s twin brother. Sylvia, like Olivia, is portrayed as a wealthy aristocrat, rather vain and somewhat spoiled. Thurio, her pompous self-involved suitor, is the foundation of the puritanical Malvolio. Julia’s first scene with Lucetta is reminiscent of Portia and Nerissa in The Merchant of Venice. There are strong echoes too ofRomeo and Juliet, particularly in Valentine’s love passages and in his banishment. 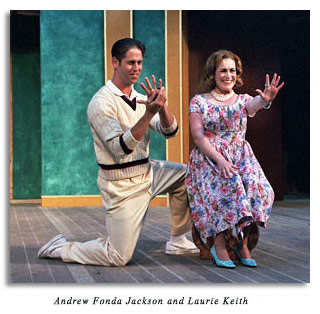 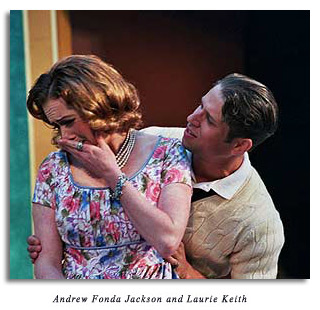 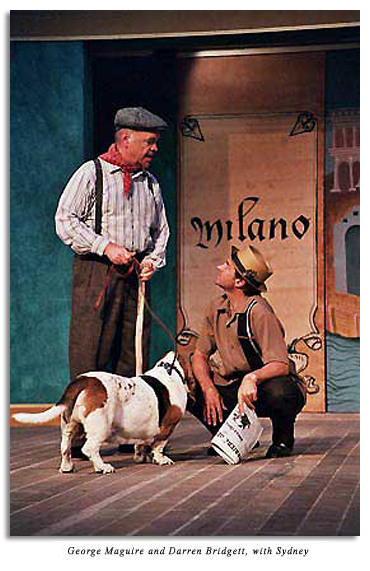 The plotting of the play is rather lightweight and some of the situations are farfetched. However, we see the seeds of what is to become greatness later on. The characters of the servants, Speed and Launce, are two well-rounded comic creations. Speed is bright, hip, streetwise and is always two steps ahead of his well meaning but somewhat dim master Valentine. Launce is much more compassionate and kind than his master Proteus. 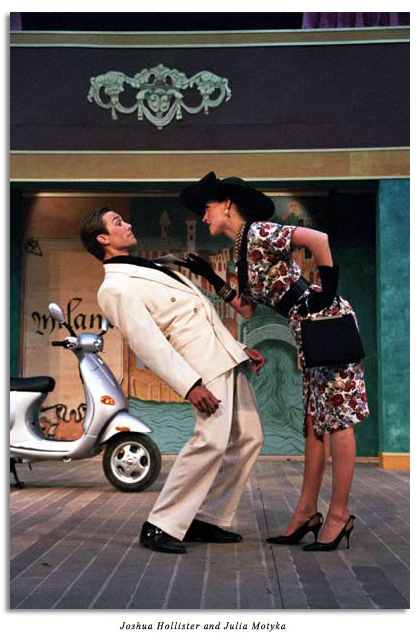 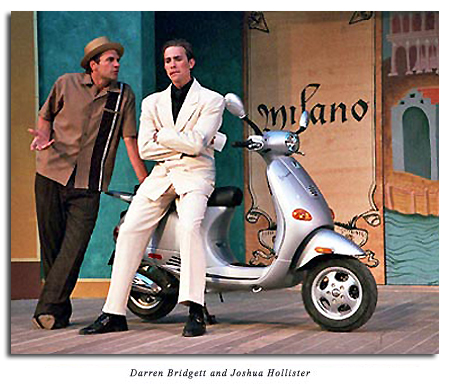 Launce’s love for his dog, Crab, and his willingness to accept punishment for Crab’s miscues is Shakespeare at his best. Dogs have always been beloved in England and I’m sure Shakespeare was aware of Crab’s “box office appeal.” Teaming up a dog with a comic character onstage was money in the bank. 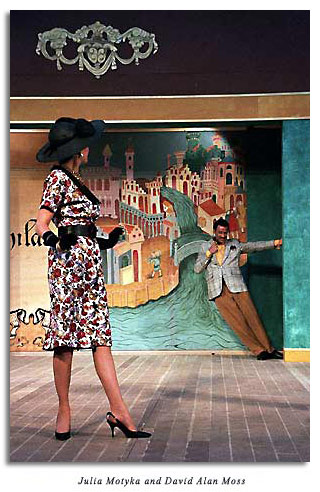 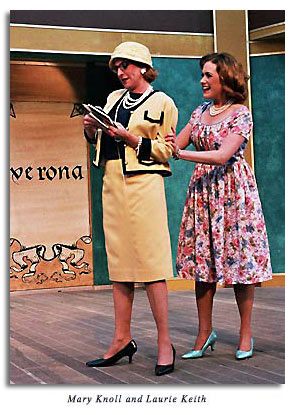 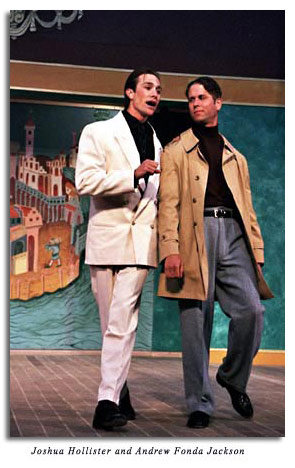 Even though Two Gentlemen of Verona is an early work, it is a very funny and lively treatment of the follies of love. Let the young poet’s words wash over you as you listen for hints of future greatness – and experience again the shallow depth of fresh young love 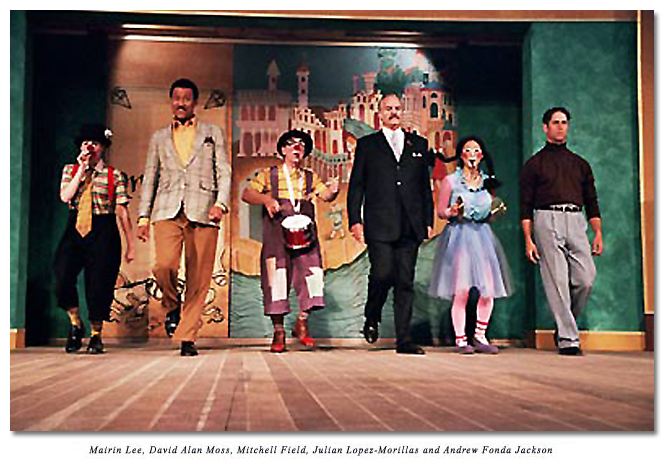 “For James Dunn, Marin’s (and possibly the Bay Area’s) longest active resident stage director, 2005 has been a very good year….last weekend a thoroughly entertaining version of the rarely performed ‘Two Gentlemen of Verona’ opened Marin Shakespeare Company’s summer season….it’s quite an achievement….he was able to put the project in the hands of a cast of seasoned Bay Area performers who are particularly adept at physical theatre….Joshua Hollister and Andrew Fonda Jackson, both solid young Shakespearian actors, provide firm anchor in the title roles.”
Charles Brousse, Marin IJ 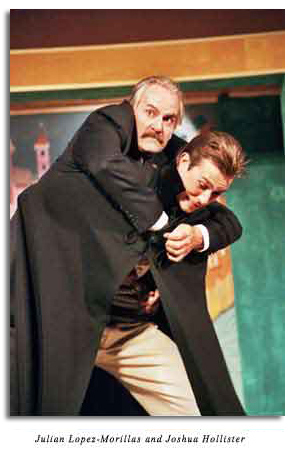 “Marin Shakes’ artistic and managing directors, Robert and Lesley
Currier, continue to build on the successes of recent years and have again assembled a stock company of seasoned and talented
performers….George Maguire…plays rustic second fiddle to his basset hound Crab….Even the engenues come out okay as performers in this one….Still, the clowns take the cake….’Two Gents’ serves perfectly as a genial entertainment on a summer’s eve.”
Ken Bullock, Commuter Times 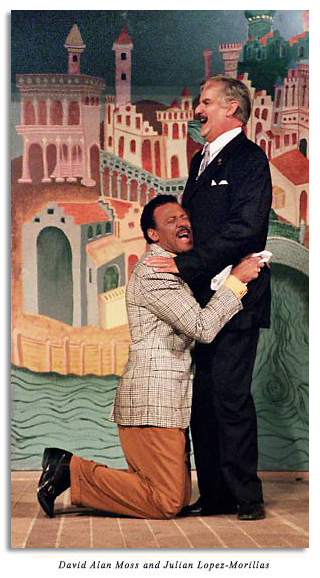 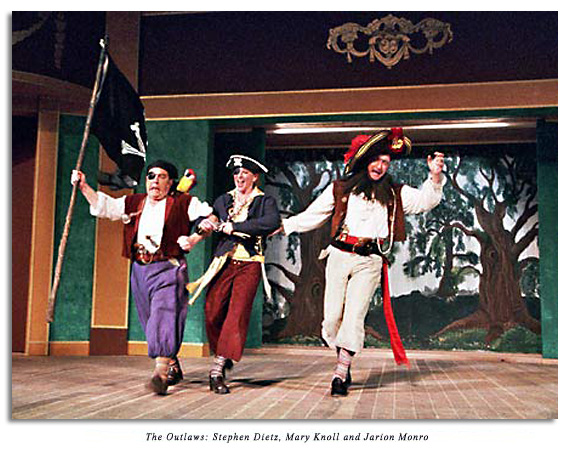 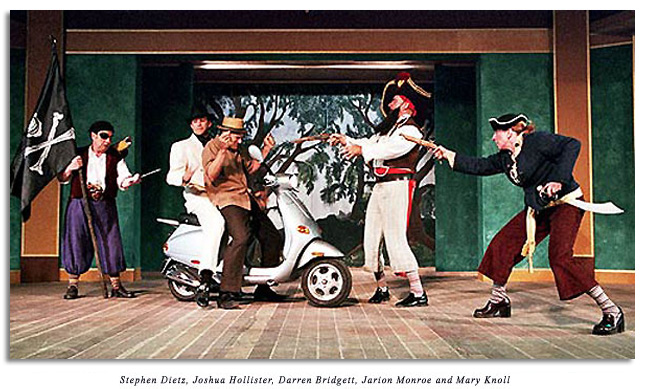 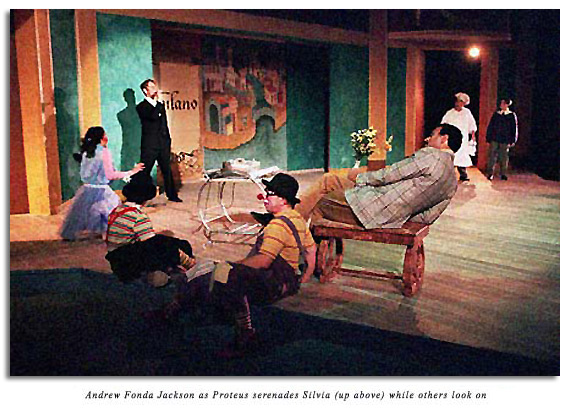 “In the ‘Two Gentlemen,’ Dunn has added a Fellin-esque
flair….Characters speak with Italian accents, and it works, with a
‘Godfather’ element of threat. Grotesque clowns cavort in between
scenes, and a Vespa roars across the stage.
Olga Azar, Marin Scope

“…the play requires good direction as well as good acting to bring out the full conflict of the story. The Marin Shakespeare group has done a superb production on both of these counts. The production boasts a strong cast of knowledgeable Shakespearean actors to make this a fun filled evening with a modern flair.” Richard Connema, Talkin’ Broadway 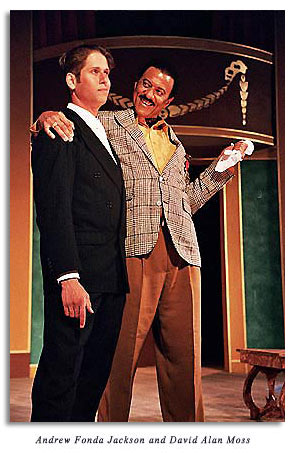 “Through the sprightliness of the cast and energizing direction a la
James Dunn, the play is rendered highly entertaining.”
Annette Lust, West of Twin Peaks Observer 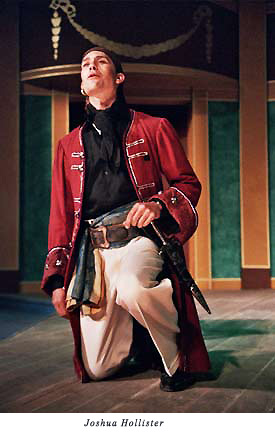 “Two Gentlemen of Verona is one of Shakespeare’s earliest comedies and though it shows hints of later greatness, it plays more like a Vaudeville show. But this is not necessarily a bad thing especially when two of the Bay Area’s best actors are cast as two of the principle comic characters. Darren Bridgett as Speed and George Maguire as Launce keep the audience laughing…”
David Kashimba, Bay Area Critics Circle 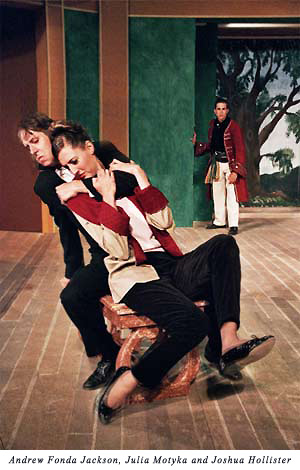 “Watching the audience, there is ample evidence that the play can be enjoyed by audiences from eight to eighty.”
Jefferey R. Smith, Bay Area Critics Circle 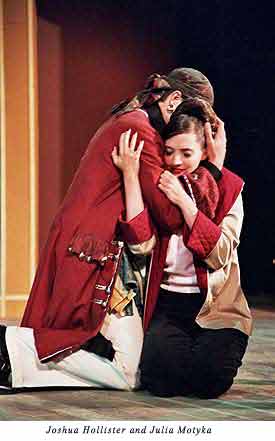 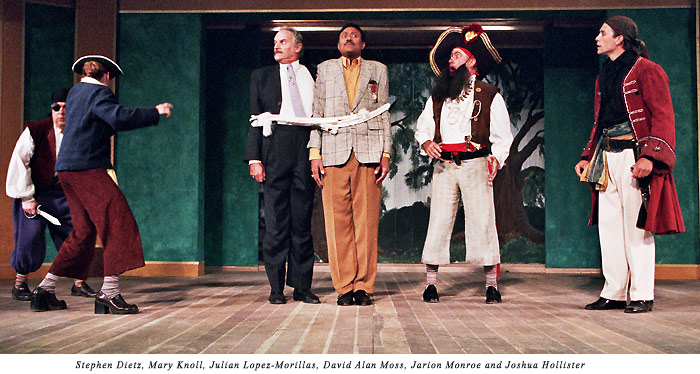 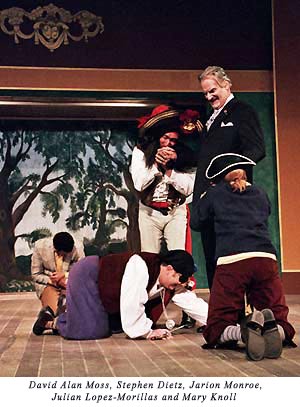 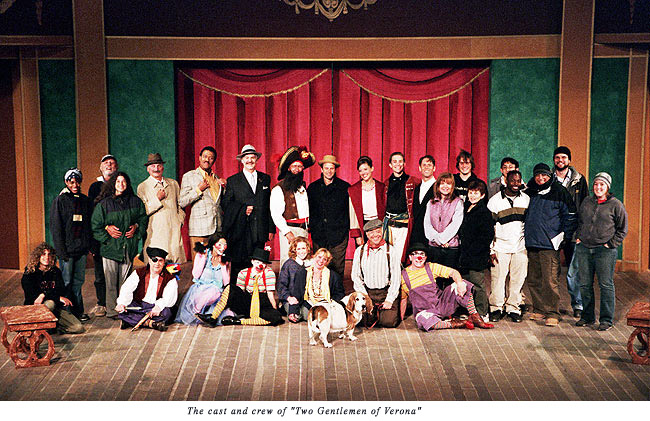 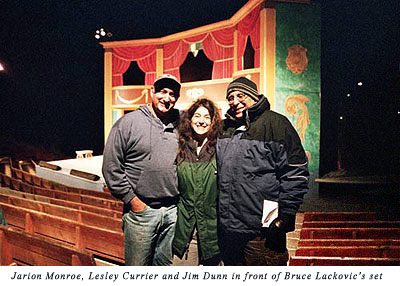 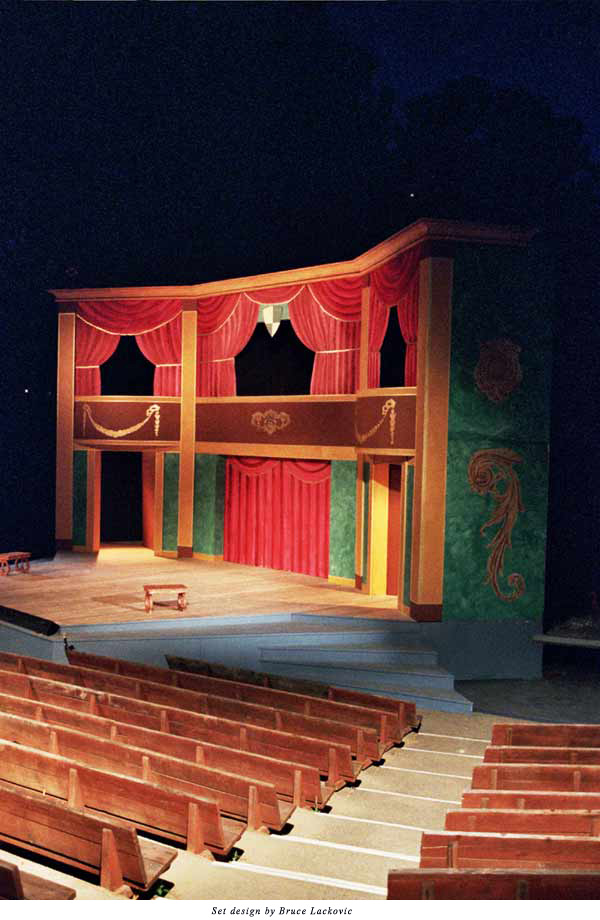 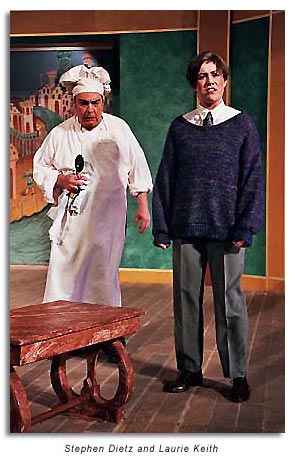 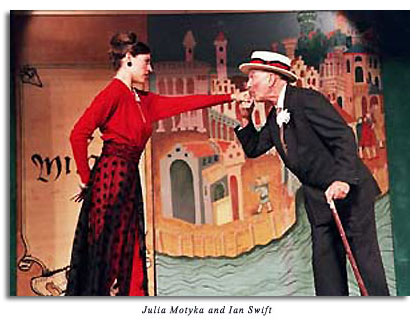 “Bruce Lackovic’s colorful cardboard set is perfect for this comedy that feels like a preview of Shakespeare’s later works….Maguire and
Crab are a show-stopping duo as Maguire’s sad expressive face vies with Crab’s sad, expressive eyes. Thurio (David Alan Moss), Valentine’s other rival for Silvia’s love, is properly pompous and foolish….Patricia Polen’s costumes are sexy and colorful….All foolishness and fun, Two Gentlemen of Verona provides another wonderful excuse to get out and get under the stars.”
Lee Brady, Pacific Sun 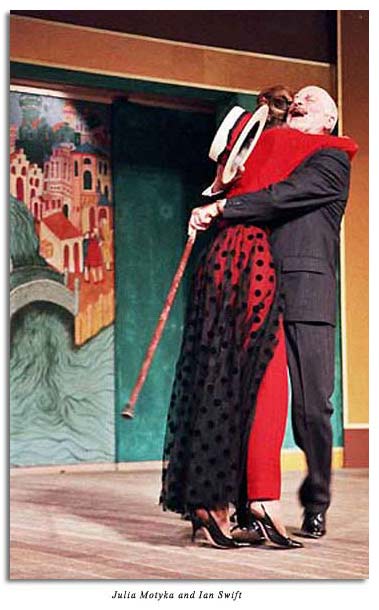 “Dunn, the plays’ director, defines Two Gentlemen of Veronaas ‘an early work with moments of genius,’ and then uses his own genius to give it shape and theatricality.”
Rosine Reynolds, The Ark 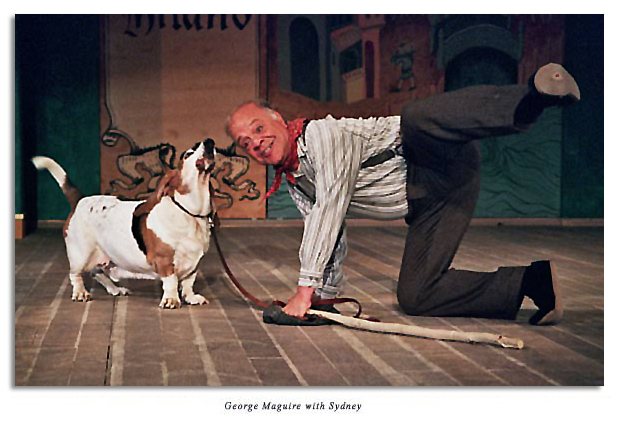