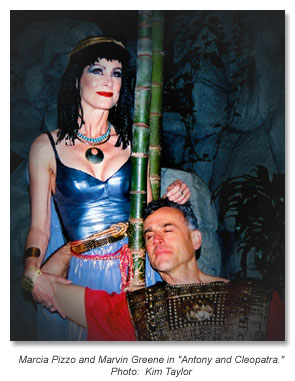 This is undoubtedly one of the most challenging of Shakespeare’s plays to stage. It frightens designers who feel they need to compete with Hollywood versions of Cleopatra’s exotic world, actors who have to embody iconic larger-than-life characters, and directors who have to wrestle Shakespeare’s unwieldy script into a stageable story. I adored cutting and shaping the script. A full 24% of the lines were snipped, leaving a (mere) two hour and forty-five minutes of glorious verbiage. I decided to just see what would happen if the scenes were played quickly and without any attempt to fill in the missing bits — the climactic Battle of Actium, for example, which happens offstage in only a few seconds.

And, somehow, it worked.

Of course our fabulous cast is mainly to be credited. What a joy to work with my long-time friend and brilliant actress Marcia Pizzo, and to bring smart, handsome, hardworking Marvin Greene back to the Forest Meadows stage after a 13 year absence. These two headlined a solid cast that reveled in detailed script work, imaginative staging ideas, and finding all the emotion in this passionate piece of great theatre.

The first audience was a revelation. Sitting in the crowd, I realized that most people in attendance, while they knew the basic story, did not know Shakespeare’s play. Each soap operaish plot twist and turn elicited gasps of surprise. It was like finding a lost Shakespeare masterpiece and staging it for the first time. After all, the play had not been seen in Marin County for over 40 years.

One of my favorite memories is of the white owl that began attending rehearsals and performances. Another is Costume Designer Abra Berman’s glee at creating a peacock-feather skirt for Cleopatra, and gold and silver armor out of plastic trays. The ad libs during the party on the Roman galleon occasionally could be heard — hilariously — by me during rehearsals. And Darren Bridgett, alternating as a mostly naked servant and a leopard-wrapped soothsayer kept everyone laughing backstage even while tragedy reigned in front of the backdrop. 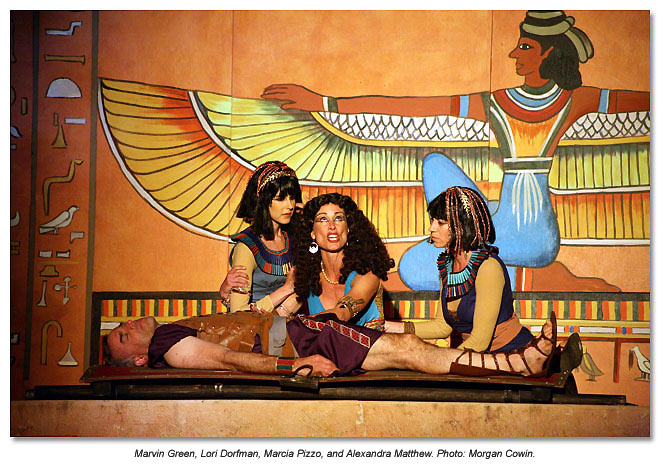 And then there were the challenges. Lifting Antony’s body — which I knew we could do, but which turned my stomache every time I saw it. And our long-suffering, scantily-clad Egyptian ladies who suffered through an historic cold-spell of rehearsals in supposedly heat-drenched Egpyt.

Thanks to everyone who came along for this rare and glorious ride. It was a privilege and a pleasure. 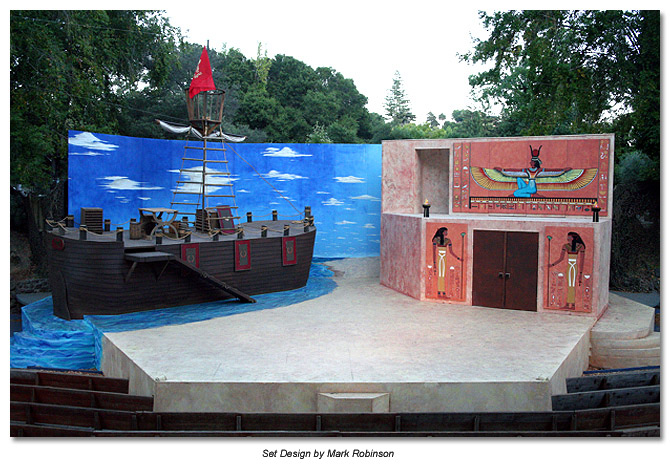 What a gift to be able to help bring to life this gorgeous and rarely-performed masterpiece! 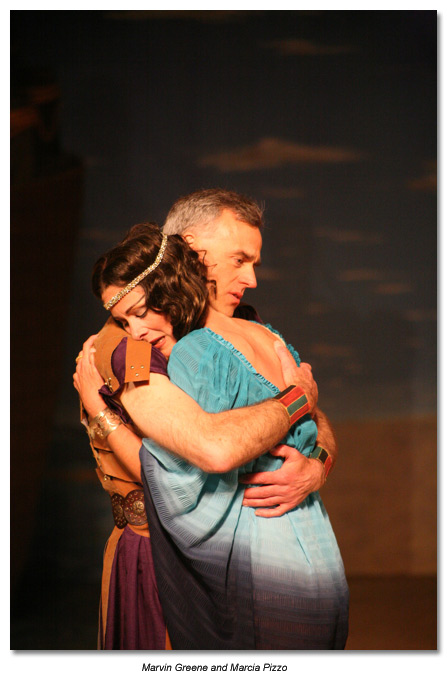 There are several reasons this play is seldom staged. The action ranges from Rome to Alexandria, with epic battles, legions of soldiers, and all the extravagance and opulence of Cleopatra’s Egypt.

When produced, there is a strong temptation to stage these stunning scenes – which is why the play has inspired expensive theatrical designs and elaborate, excessive films. 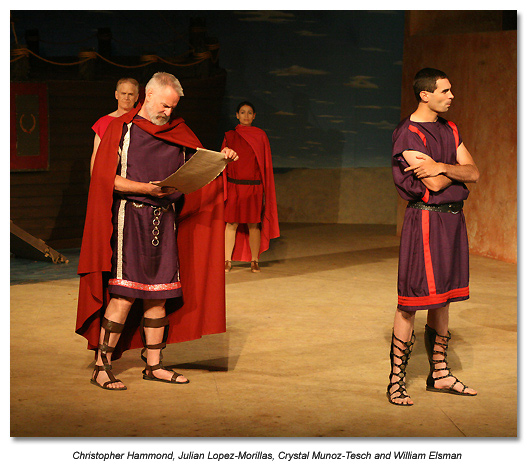 The language of the play is at times exotic, as if Shakespeare were creating an Egyptian idiom. And the characters are legendary, larger-than-life, with a daunting amount of passion, intelligence, and variety.
You will not be seeing a Hollywood film version of the play tonight. We have chosen to play the story on a mostly bare stage, and to trust that Shakespeare’s words will evoke the glory of Rome and the glamor of Egypt. 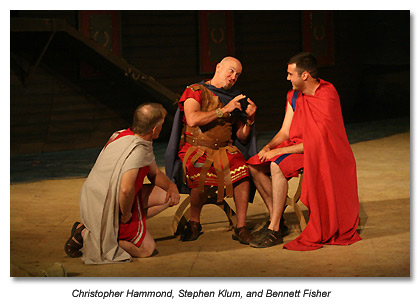 And you will hear some of the most beautiful words Shakespeare ever conceived. My personal favorites are “garboils” which onomatopoetically means something like garbled turmoils and well describes almost any political situation of note including the ones in this play, and a word used by both Antony and Cleopatra that appears in no other Shakespeare play, “discandying,” which is something sweet like life and love or honor and glory melting away, like a lump of sugar in the rain.

What are critics are saying:

” Managing director Lesley Schisgall Currier’s staging keeps the story in period and the action crisp….But in the end it all comes back to a mad romance between two charismatic leaders, heedless of consequences. Whenever all the war and statecraft subsides to bring us back to that story, Greene’s headstrong Antony and Pizzo’s formidable Cleopatra make it an affair to remember.” 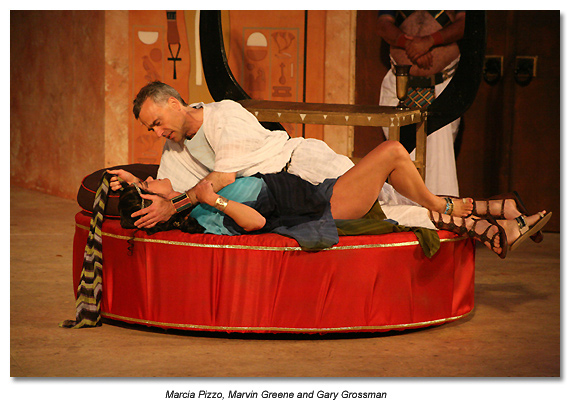 “It begins as a charming sex farce, with Marcia Pizzo’s queen and Marvin Greene’s general partying on in Egypt.

Denial on the Nile it may be, but Cleopatra’s kittenish charms are catnip to the aging tomcat. Director Leslie [sic] Schisgall Currier wisely keeps the tragedy-to-come off in the wings, and even audiences that know this love affair won’t end well can delight in the onstage hijinks of Shakespeare’s Antony and Cleopatra. 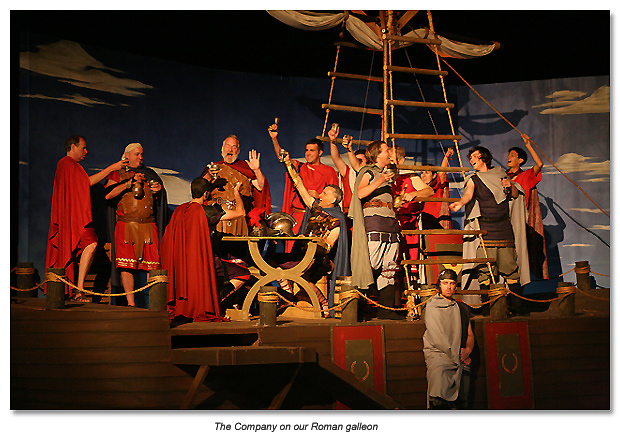 …it is in the longer second act that the actors get to show their dramatic mettle. Greene is impressive as his Antony gets pushed to the wall and, finally, realizes that he has lost it all—his love, his reputation and his manhood. As Greene delivers his painful confessions, we finally see the hero underneath the handsome lounge lizard. 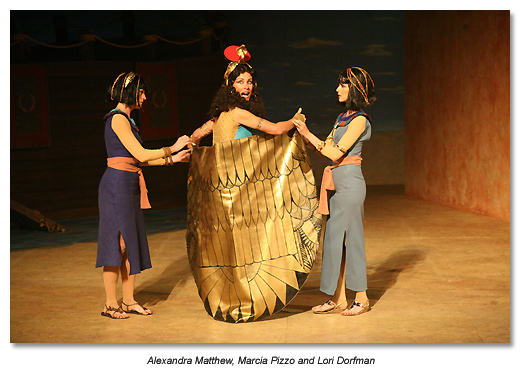 Pizzo embodies the description by Enobarbus: ‘Age cannot wither nor custom stale her infinite variety.’ Along with her faithful handmaidens Iras (Lori Dorfman) and Charmian (Alexandra Matthew), she wrings subtle emotional changes throughout. The actor has help from costumer Abra Berman, whose colorful designs are varied enough for a runway show. The final cape is fantastic, reflecting the world that the two lovers could have ruled—if they hadn’t been so busy making love.

Currier keeps the alternating scenes of love and war clean; and, although we hate leaving Pizzo, Dorfman and Matthew as they play fun games, Lopez-Morillas and Elsman bring on a refreshing show of male passion.”

“Those who yearn for the classics will be delighted to see history brought to life by the Marin Shakespeare Company’s ‘Antony and Cleopatra‘ at the Forest Meadows Amphitheatre at Dominican University….

The colorful minimalist costumes, designed by Abra Berman of Novato, mimic those from the Roman legions yet wisely allow for the actors’ movement. Cleopatra’s outfits are truly fit for a queen, from seductive white gauzy robes to a skirt fronted with real peacock feathers.

The play is challenging, yet these passionate actors are clearly worthy of the task.” 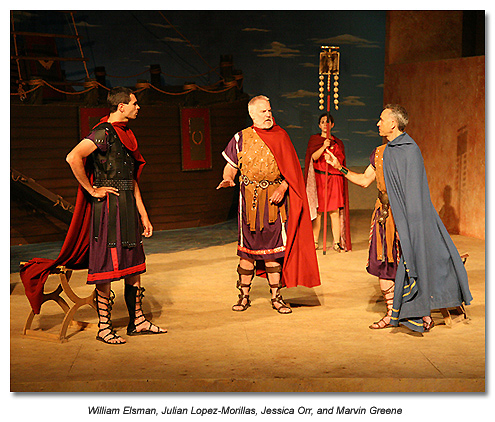 “In the current outdoor production at the Marin Shakespeare Company—the first time in over 40 years that this play has been staged in the North Bay area—director Lesley Currier puts her emphasis on the over-the-top emotional underpinnings of the story, sometimes pushing the show to the edge of camp.

That’s not a complaint. Currier takes a story that almost begs to be played as camp and manages to keep it just this side of that, while still allowing her actors to go for the thick gooey gusto of their roles…. 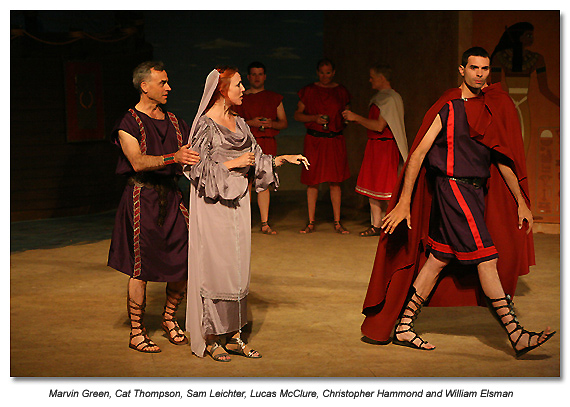 One of the best scenes in the show is the tension-filled meet-up between Antony and Octavius, and Shakespeare’s writing here is as good as it gets (in this conspicuously knocked-together effort by the playwright, anyway).

As the second act becomes a series of chronologically linked vignettes depicting the inevitable wars and betrayal, Cleopatra becomes more needy and manipulative as Antony goes rapidly cuckoo. The result is both gripping and occasionally hilarious, a kind of satire poking fun at the vanity of the world’s richest and most famous.”

“…director Lesley Currier is a brave woman to tackle this seldom-produced historical play. Her production of this drama of love and diplomacy is very well realized with stunning performances full of deep emotion from Marcia Pizzo and Marvin Greene as the great lovers….

While the two main players are undoubtedly the stars, the supporting cast is also impressive, especially the excellent Stephen Klum as Enobarbus, Antony’s wise general who easily sways between carousing friend and guiding light. His female equivalent is Charmian, played with great feeling by Alexandra Matthew. And Cat Thompson’s stately elegance as Octavia, sister of Caesar and wife of Antony, is effective….

Lesley Currier and her outstanding cast have created a production of Antony and Cleopatra with sexiness, lightness and great wit, which counterbalance the last act’s tragedy.” 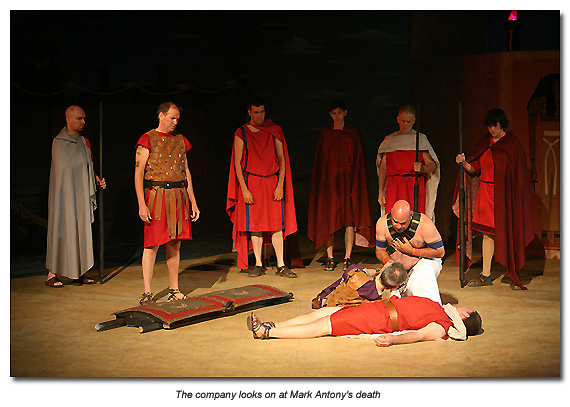 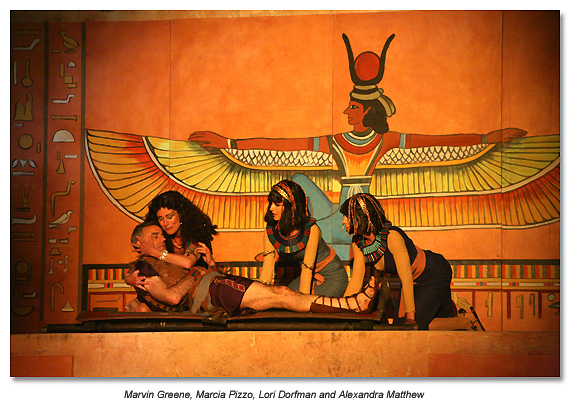 “For the last play in Marin Shakespeare Company’s 2010 season, associate Artistic Director Lesley Currier directs Antony and Cleopatra and it is a pleasure to attend a Shakespeare play that would receive his approval….it is refreshing to observe Romans and Egyptians dressed as Romans and Egyptians (great costumes by Abra Berman) giving good to great perceptive delivery to Shakespeare’s lines.”

–Kedar Adour, For All Events

” Antony + Cleopatra is given a thrilling production by Marin Shakespeare Company.

There is no doubt that Antony + Cleopatra is one of Shakespeareʼs most daunting plays. With action that ranges from Rome to Alexandria, land to sea, battle scenes, on stage suicides, confusing plot twists and hard to understand characters, the play is often more honored in theory than in production.

There has not been a professional production in the Bay Area for over 10 years. Happily, the present staging by the Marin Shakespeare Company under the skillful hand of founding Managing Director Lesley Schisgall Currier is one of great clarity and emotional profundity…. 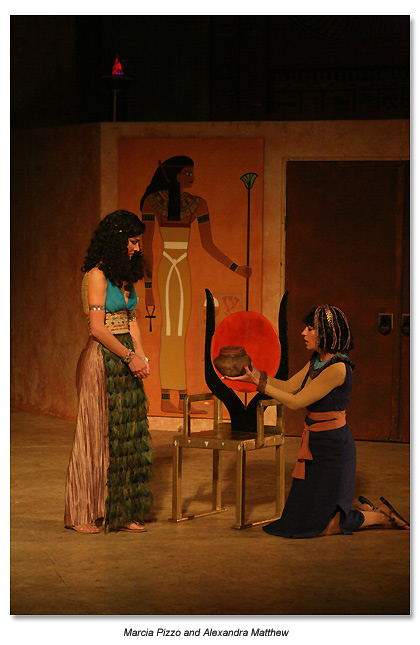 Mark Robinsonʼs minimalist set consists of two simple staging areas (a ship and an Egyptian building) to suggest Rome and Alexandria, allowing the actors to move fluidly and convincingly between locations without confusion. Abra Bermannʼs suggestive costumes do not strive for realism, but use simple components (plastic and paper) to convey such elaborate ideas as royal headdresses, gorgeous gowns, and fighting armor. As I saw a matinee performance, I cannot comment on the lighting design but was impressed at how easy it was to understand the action without benefit of light changes. The show is truly Elizabethan in its simplicity…. 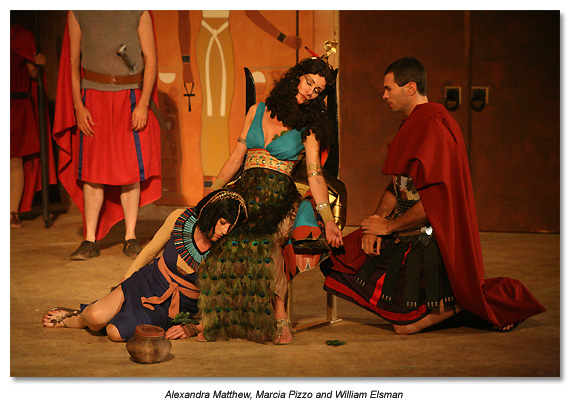 The intelligent, beautiful and sexy Marcia Pizzo is convincing as Cleopatra, a woman of middle age who is in complete mastery of her sexual power and thoroughly enjoys the game of teasing and pleasing her Antony. In her many mood shifts (Cleopatraʼs famed “infinite variety”) she delights and entrances. Childlike and irritating in some moods, she rises soaringly to heroic dignity in her final death scene as she refuses to be taken captive for display in Rome but dies like a goddess expecting to join her godlike lover. She is captivating.

Ms. Pizzoʼs Cleopatra is well matched by Marvin Greeneʼs Mark Antony. Movie star handsome and with the easy, but aging, graceful physicality of a great athlete and an emotional excitability equal to Ms. Pizzo, Mr. Greene avoids making Mark Antony an object of pity. It could be argued that Mark Antony is a pathetic man, manipulated by a strumpet and his own lust towards a tragic end. Mr. Greene suggests, however, that Antony is vulnerable to Cleopatraʼs charms not simply out of lust, but because he has learned to question the martial values by which he has lived. Tired of war and disgusted by the arrogance of the youthful Caesar, he is seeking an alternative way of life and ventures open-eyed into the arms of Cleopatra. Mr. Greene communicates the subtlety of Mark Antonyʼs thought with a supple vocal instrument and an impressively open face which registers every tweak of emotional and intellectual struggle. This is a memorable performance.

The remainder of the ensemble performs admirably in all respects. Stephen Klumʼs devastatingly effective Enobarbus deserves special mention. His vocal training at The Old Vic School is used well here. In every speech, his clarity of delivery and inner life make Shakespeareʼs complex language completely accessible. The arc of his characterʼs growth from loyalty to treachery to regret and ultimate suicide is a lesson in fine classical acting and thrilling to witness.

It is a commonplace among review editors to insist that nobody should write an entirely uncritical review. I find little to complain about in this production but in the interests of showing my evenhandedness, I suppose I could point out that my cup of Peetʼs coffee, purchased at intermission, was cold before I could drink it because I was too involved in the action. I love Peetʼs and this was a disappointment.”