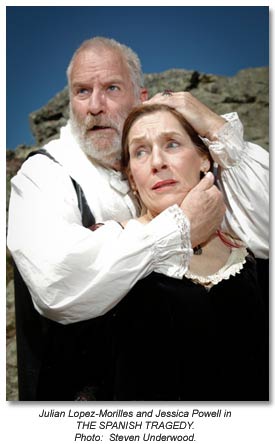 THE SPANISH TRAGEDY was one of the most popular plays during Shakespeare’s lifetime, and the rage of the Elizabethan stage when he arrived in London. The first Elizabethan revenge tragedy, THE SPANISH TRAGEDY heavily influenced TITUS ANDRONICUS and HAMLET with its story of revenge aroused by murder. The language of the play is highly rhetorical and passionate.

A story-within-a-story, THE SPANISH TRAGEDY is presided over by the spirit of Revenge, who has brought the Ghost of Andrea to witness what is about to unfold. The story of the play begins when the Spanish army has defeated the Portugese, who have agreed to pay tribute to Spain. During the course of the war, the young Andrea was killed by the Portugese Prince Balthazar. The Prince was then captured in battle by Horatio, the son of the Spanish King’s advisor Hieronimo, although the king’s nephew Lorenzo tries to take credit for the capture. When Prince Balthazar is brought to the court of Spain, the Spanish king treats him with honor, granting Horatio his ransom, and placing him under the care of Lorenzo, who reaps other spoils as well. Horatio goes to tell Lorenzo’s sister Bellimperia how Andrea died, knowing that Bellimperia and Andrea were secret lovers. Andrea’s kindly friend Horatio wins Bellimperia’s love. But Balthazar has set his heart on marrying the king’s neice Bellimperia, and the king agrees to this match, as a way of cementing an alliance between Spain and Portugal. When Lorenzo bribes Bellimperia’s servant Pedrigano to betray her love for Horatio, Lorenzo and Balthazar find the lovers in Hieronimo’s arbor, brutally murder Horatio, and lock Bellimperia away from the court.

When Hieronimo and his wife Isabella find their son senselessly murdered, they are distraught to the point of madness. But Hieronimo soon begins to suspect that the perpetrators may be beyond his grasp — he receives a letter from Bellimperia accusing the Portugese Prince and the nephew of the king, but finds it hard to believe such royal personages would stoop to murder.

Lorenzo, in an Iago-like effort to cover his tracks, arranges for Pedringano to be caught murdering the Prince’s servant Serebine, who also witnessed the crime. When Pedringano is brought before Hieronimo in his role as judge, he is sentenced to be hung. Pedringano jokes his way to the gallows, having been tricked by Lorenzo into thinking his pardon is imminent. After his death, the Hangman brings Hieronimo a letter confirming the truth about Horatio’s murder.

But Lorenzo stops Hieronimo from accusing him in front of the King, who has summoned the Portugese king to Spain for the upcoming nuptials between their heirs. Hieronimo, either mad or feigning madness, bides his time. When the king asks Hieronimo to prepare a play for the wedding celebration, Hieronimo casts Lorenzo, Balthazar and Bellimperia in key roles in his theatrical tragedy, leading to a dramatic climax that satisfies the Ghost of Andrea and Revenge itself.

THE SPANISH TRAGEDY was performed, revived, rewritten, printed and reprinted over the entire course of Shakespeare’s career. With madness, hangings, stabbings, and a threatened burning at the stake, the action of the play is exciting and surprising. The language is vigorous, clear, and beautifully written. The play combines black humor and high pathos.

Why is THE SPANISH TRAGEDY hardly ever performed? We don’t know!

But we do know you’ll have a rare chance to see this hugely influential play at Forest Meadows this summer — a chance that may not come again any time soon!

A COMEDY OF ERRORS 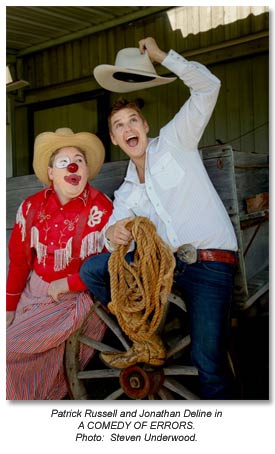 THE COMEDY OF ERRORS was probably Shakespeare’s first comedy (written not too long after he first saw THE SPANISH TRAGEDY performed).  Based on a comedy by Plautus, THE MENAECHMUSES, Shakespeare adapted Plautus’ story of twins separated at a young age who wind up unbeknownst to anyone in the same town, and added to the fun by creating a second set of twins.

A COMEDY OF ERRORS is our adaptation of this classic Shakespeare farce.  We’re adding to the fun anew by setting the story in the days of Wild West Texas.  The warring towns of Ephesus and Syracuse have been transported to Abliene and Amarillo.  We’ve edited out a few of Shakespeare’s staler jokes (“Why, but there’s many a man hath more hair than wit.”  “Not a man of those but he hath the wit to lose his hair.”)  We’ve added a joke or two of our own.  And we’ve upped the enjoyability factor by adding country and western songs, live music, and a few Yee-haw’s!  If you think you may not like Shakespeare, this is the play for you.  And if you’re a Shakespeare nut, you’ll enjoy some new twists in this old chestnut.  So saddle up your ponies, and giddy on up over for some rootin’ tootin’ low-falutin’ fun.  Happy trails! 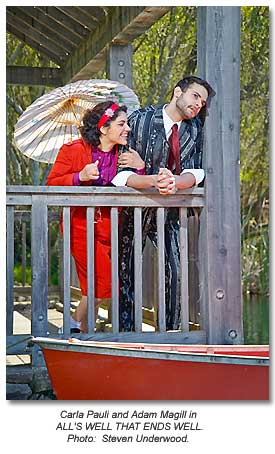 ALL’S WELL THAT ENDS WELL falls between Shakespeare’s more mature comedies and his final romances, with their yearnings towards forgiveness, redemption, and grace.  It is a rich and complex story of the human heart, callow youth, and ancient wisdom.  There is something magical about this story of the low-born Helena who, through using her dead physician father’s medicines to cure the ailing King of France, wins in marriage any man of her choosing.

When she selects Bertram, the handsome young Count of Rousillon in whose home she has grown up, he rebels against the match, spurns his wedding bed, and runs off to Italy to fight in the wars.  The plucky Helena follows after him, only to find he has been trying to seduce a beautiful poor virgin, Diana, who has rejected his advances.  Helena, Diana and Diana’s mother conceive of a scheme to bring Helena and Bertram together again.  Meanwhile, we see how foolish, cowardly, and unfaithful men can be through the comic actions of Bertram’s so-called friend Parolles.  When all the men and women are finally reunited, lies are revealed, and so are some new truths.  The characters learn what is truly in their hearts and all’s well that ends well….perhaps.