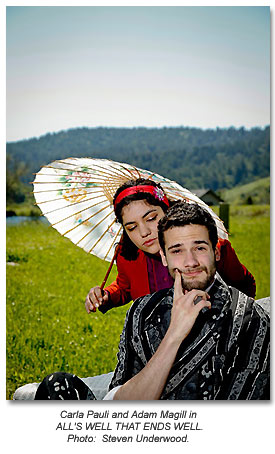 This is a strangely unfunny Shakespearean comedy. Of course it features the wonderful Parolles, in our version played beautifully with brio and pathos by James Hiser. But much of the rest of the humor is far more psychological and less broadly theatrical than much of Shakespeare’s other writing. 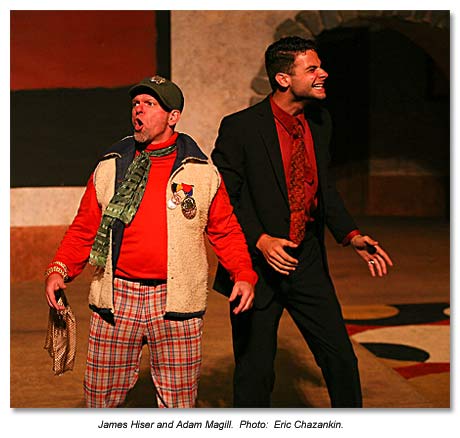 We met the classiness and modernity of the script with an abstract art inspired production. Sleek costumes and a museum-like set were provided by Abra Berman, Shannon Walsh and Joel Eis. Lucas McClure as the clown Lavatch composed some original songs for the production. 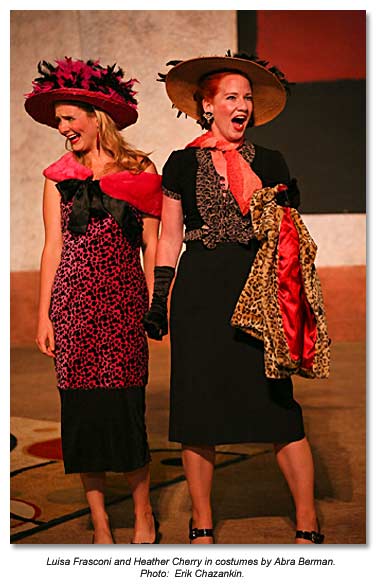 Director Robert Currier and his cast struggled to find the perfect ending to the play, trying about a half a dozen versions (including one where Helena rejects Bertram and decides to pair up with Diana instead.) Eventually, the cast found an ending that was highly satisfying in its ambiguity.

In our 24th season, this was our 24th different Shakespeare title. We are happy our audiences are enjoying taking the journey with us through the Shakespeare canon.

It is commonly acknowledged that audiences love comedies and are more likely to buy tickets when there is laughter and fun on offer. So how can it be that in in the past 23 years we have never staged this comedy of undisputed Shakespearean authorship whose title alone has become a cliche of the English language? Why is this play so rarely performed? 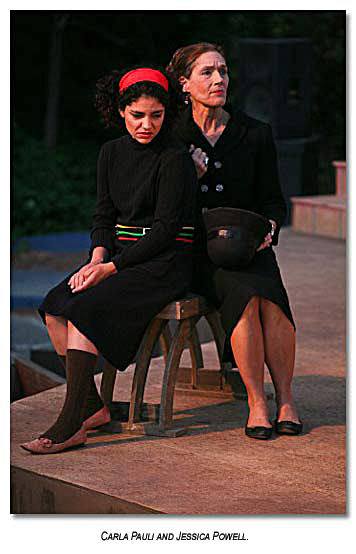 As witty and rich as the story, characters, and language of All’s Well That Ends Well is, it has been considered one of the “problem plays.” The characters are riddled with character flaws, and the ending – despite the title – is not a feel-good fairy tale happy-ever-after conclusion.
Shakespeare is wrestling in this play with some thorny issues. One is the difference between a person’s outer worth and inner worth. Do the clothes make the man? Is a person’s exterior an indication of their interior? Particularly in Shakespeare’s world, but also in our own today, clothing indicates status, style, and values. All of the characters in this play need to learn how to determine a person’s inner worth, despite his or her outer display. 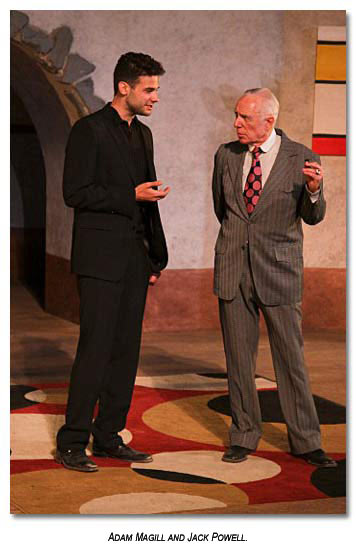 Another issue examined is loyalty. Bertram is told he should be blindly loyal to his king, the play’s father figure. The Countess’ loyalty is tested when Helena reveals her secrets. Helena maintains her loyalty to Bertram in spite of the many ways in which he shows himself to be unworthy. Loyalty is a challenge for the characters in this play.

This play, written in 1606, is a prelude to the great late romances that were to come. In grappling with ideas about true worth and true duty, Shakespeare is beginning the exploration of how to come to grips with his own questionable worth as a theatre artist (a person who wears many different costumes) and his lifelong lapses as a duteous father. This play may not have a neat happy ending or characters with clearly defined stories, because Shakespeare himself could not yet imagine his own happy ending. It is not until he learns how to envision the forgiveness of tortured fathers reuniting with lost daughters that Shakespeare finds his own personal redemption. All’s Well That Ends Well is his fascinating journey towards learning about how to achieve that resolution. 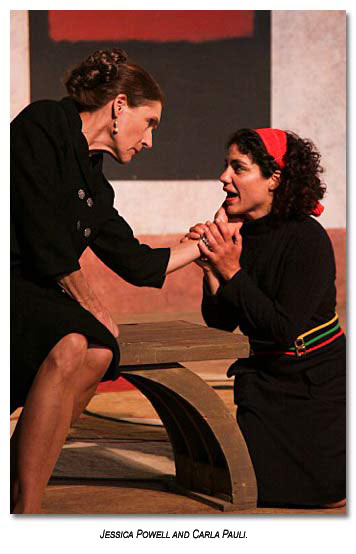 “James Hiser picks up the slack in the comedy department with an outsize performance as the preening braggart and secret coward Parolles, Bertram’s pal, with Scott Coopwood playing a superb foil for him as the relentlessly mocking nobleman Lafeu….Jessica Powell is authoritative and kind as Bertram’s mother the countess, who loves Helena like a daughter. Luisa Frasconi has a delightful turn as the new object of Bertram’s attentions, relishing being pursued with no intention of relenting, and Heather Cherry is amusing as her venal mother….For all its frustrations about this bright young beauty chasing this shameless jerk, “All’s Well” has some delightful scenes that are well executed here, especially Parolles’ comeuppance.” 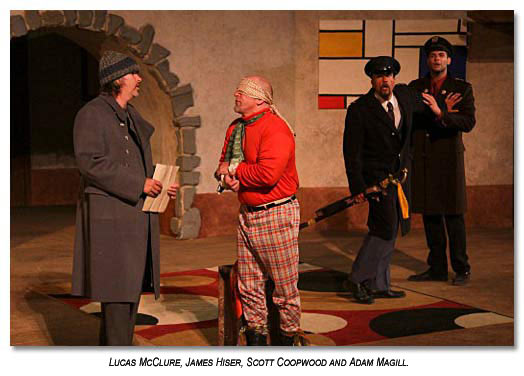 “A cast of nine, ably directed by Robert Currier, confidently exploits the show’s many visual and verbal comic possibilities ….a thoroughly satisfying entertainment.” 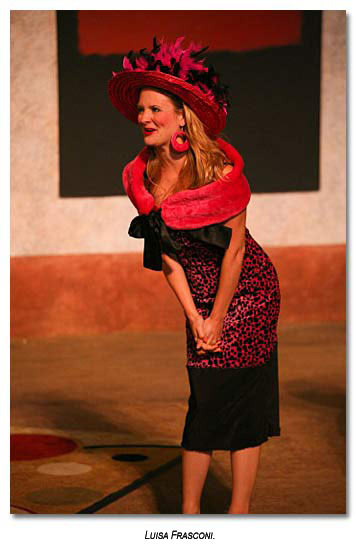 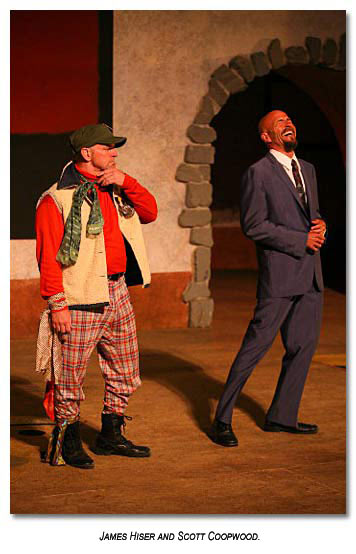 “With an entire cast of skilled Shakespearean actors, director Robert Currier stresses the comedy…. it’s an evening of fun at Marin Shakespeare Company’s outdoor production of ‘All’s Well That Ends Well.’ …This production boasts five outstanding guest artists—Lucas McClure as Lavatch, the wise fool or clown, who also composed some original songs for this production; Jessica Powell as the Countess Rousillon, a great lady, as charming as old Lafeu; Scott Coopwood who is a true French gentleman; James Hiser as Parolles, companion to Bertram (Adam Magill), son of the Countess, a soldier with false bravado; and finally, Jack Powell as the King of France in an amazing performance. In addition to these five Equity actors, we have rounding out the cast, the leading romantic couple, Bertram and Helena (Carla Pauli).”

Flora Lynn Isaacson, For All Events 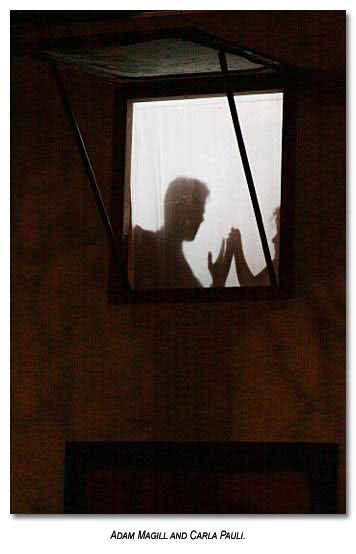