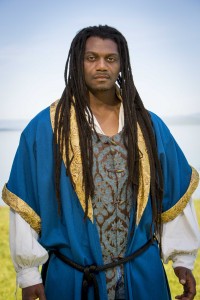 In the theatre, we take artistic risks all the time.  But this production was perhaps one of the riskiest we’ve ever attempted.  Not the design or theatrical elements – this was a straight-forward, clear and concise telling of Shakespeare’s magnificent tale of deceit and despair.  But the casting choice for our lead actor – the first time ever we have cast a former Shakespeare in Prison student on our mainstage – stirred debate and caused soul-searching about our values as a company.  For there were some who doubted whether an actor who had one single day of Shakespeare performance experience, and that in a production that took place in a prison gym overseen by armed guards with no separation between the toilets and the stage, could or should take on one of Shakespeare’s most demanding roles.

The answer was a resounding YES!

Dameion brought a wealth of life experience, emotional vulnerability, powerful self-expression, and natural stage presence to the role.  Many experienced theatre-goers told us he was the best Othello they had ever seen. The cast coached him and cheered him on, and learned as much as they taught.  Cassidy Brown as Iago – another brave casting choice for an actor often pigeonholed as a comic talent – was extraordinarily intelligent, charming, expressive, and beguiling. Luisa Frasconi brought a combination of innocence and strength that made for a completely believable Desdemona.  Elena Wright was an earthy and fierce Emilia, showing tremendous range after her comic brilliance as Viola in the summer’s earlier Twelfth Night. Steve Price gave a detailed and tragically powerful performance as Brabantio, and Glenn Havlan ruled as the Duke.  Jeff Wiesen as an extremely likeable yet volatile Cassio, Braedyn Youngberg as a simpering Roderigo, Jackson Currier as a dashing Montano, Richard Pallaziol as a kind-hearted Lodovico, Regina Morones as a feisty and sexy Emilia and the rest of the ensemble unanimously loved working with Dameion.  He was praised both for his work onstage, and for the inspirational role model he is offstage as well.  His strength of character, humility, poetic and thoughtful self-expression, and dedication were well noted.

Audiences gave standing ovations at every performance.  They left the theatre with tears and smiles on their faces.  The production was thrilling, devastating, and moving.

But more than the production itself, this project gave us the opportunity to demonstrate what we see each week when we work in California State Prisons.  There is a tremendous amount of talent and potential in the millions who we incarcerate.  Many have the ability to be great artists, community leaders and healers, parents, business people, and contributors to society. Through programs like our Shakespeare in Prison classes, we help to provide the rehabilitation opportunities that will allow some or many of the incarcerated to be able to live up to their full potential when they are released back into society, which will be the case for 95% of them. Dameion is a shining example of what can happen when we give people a chance.

What a year for Shakespeare! Shakespeare-lovers all over the globe – and beyond – are celebrating the 400th anniversary of the death of our beloved poet and playwright. Perhaps you participated on April 23 at the downtown San Rafael Plaza in our Shakespeare Sonnet Celebration, or joined festivities in London or will hear astronauts on the international space station reciting favorite lines from Shakespeare including: “I’ll put a girdle ‘round the earth in 40 minutes” and “I could be bounded in a nutshell and count myself king of infinite space.”

As our summer season shows, Shakespeare is as relevant as ever, inspiring contemporary writers like the brilliant Lauren Gunderson, providing us with delicious entertainment in plays like Twelfth Night, and encouraging us to grapple with difficult questions about race, gullibility and complicity in plays like Othello.

This summer’s production of Othello highlights the growth of our Shakespeare for Social Justice program. Since 2003, we have provided classes for men at San Quentin State Prison, who have studied and performed Shakespeare plays, and written autobiographical plays inspired by themes from Shakespeare – proving that Shakespeare can be relevant and powerful even for those from whom we might expect the least. Recently, our program has expanded dramatically, as the transformational and healing power of this work has become evident. We now teach at four prisons and the Marin County Community School, serving youth within the juvenile justice system. Last year, we began working with incarcerated veterans. This year, we started a Shakespeare for Social Justice Troupe allowing the formerly incarcerated to tell stories of importance through theatre.

We have long dreamed that one of these actors might some day perform on the Forest Meadows stage. This year, that dream becomes a reality. Dameion Brown was incarcerated for 24 years. He performed Shakespeare for the first time at Solano Prison last year and upon his release in August of 2015 came to see Richard III and then asked to play Othello on our stage. After lots of reading through the script together and much deliberation, we felt confident Dameion could give a moving performance of this character who has experienced so much conflict and imprisonment and who wins Desdemona’s heart by sharing his life stories with her. Dameion now works at Community Works West in Oakland, mentoring youth ages 18 – 25, helping them make life choices that will keep them out of prison. And he’ll be playing Othello this summer. His story is inspirational.

We look forward to lots of discussion this summer and beyond about the issues raised by Lauren Gunderson, Shakespeare, and Shakespeare for Social Justice. Once again, Shakespeare is the catalyst for our exploration of questions and stories of great importance. We’re ready to sneck up and dig in!

“Marin Shakespeare’s new production of ‘Othello’ has found the right actor to play this big man Othello, powerful in body and spirit, thunderous in his approval, thunderous in his despair. Dameion Brown IS Othello. It is a special talent from all the actors, and especially from director Robert Currier to bring this powerful drama to the stage in all its fury, and the audience to its feet.”
– David Hirzel, For All Events

“…Dameion Brown turns in an impressive performance in his professional debut, and in the challenging role of Othello at Marin Shakespeare Company…By making the brave decision to cast Brown, and to highlight his incarceration record rather than downplay it, the production instantly brings us into dialogue with Shakespeare in an almost visceral way….Company stalwart Cassidy Brown, cast almost ridiculously against his usual comic type, is a fine Iago and a heroically supportive stage partner. Luisa Frasconi, despite being dressed in Renaissance costume, brings an attitudinally contemporary edge to Desdemona that fits well with the play’s context. Elena Wright, usually a leading lady, is powerful as Emilia. Currier’s staging was clean, efficient, and communicative.”
– Kurt Daw, Shakespeare’s Tribe

“Throw aside any doubts right now. Dameion Brown is a superb, fully professional Othello, and absolutely deserves to be playing this role. He brings a treasure chest of gifts: physical beauty and grace, a fine (if as yet not fully trained) speaking voice, a full intellectual grasp of Shakespeare’s poetry, and an out-sized emotional life. He is excellent….Cassidy Brown is a deliciously humorous Iago….this is a production that serves the play well, and is certainly worth a trip across the bridge to Marin.”
– Charles Kruger, Theatrestorm.com

“Get Thee to Marin to see this masterfully directed, powerfully acted, and beautifully moated ‘Othello,’ right now. Do!…From his first entrance as a princely Othello, Dameion (Brown) owns the stage, delivering a mesmerizing performance that builds to an intense, tragic ending.  His delivery of the Moor embodies grace, intelligence and stature. He looks every inch the successful admiral returning from battle. Brown’s emotional truth comes through solidly and surely, building on his personal history and his year of intense preparation….Onstage as Othello, we feel his courage and conviction in reaching so high after regaining his freedom.   His future on stage looks most promising….Cassidy Brown bursts with Iago’s wit, energy, and humor. He makes music with every syllable of Iago’s robust and sexual soliloquies….Othello’s wife Desdemona (the charming Luisa Frasconi) stands out as the visual embodiment of Renaissance beauty and courage.”
– Susan Dunn, Theatrius.com

“Shakespeare’s ‘Othello’ the dark tale of treachery, betrayal and manipulation, is brought to its tragic life in Marin Shakespeare Company’s bold production. Bold for two wonderful starring performances by the Brown’s:  Cassidy Brown, playing against type as Iago, and the stage debut of Dameion Brown in the title role. Robert Currier’s direction, the fine ensemble acting and tour de force performances by Cassidy and Dameion Brown raise this weakest of Shakespeare dramas out of the morass it elicits.”
– Steve Murray, For All Events

“Marin Shakespeare’s ‘Othello’ … a strong account of one of Shakespeare’s most problematic works. Dameion Brown delivered a performance that will be long remembered for its power and emotional commitment.”
– Charles Brousse, Pacific Sun

“‘Othello’ makes remarkable debut….Kudos to Director Robert Currier for drawing such powerful performances from his large cast. ‘Othello’ has no happy ending, except for the life-changing experience of the actor who commands the title role.”
– Cari Lynn Pace, Marinscope Newspapers

“There’re many reasons to catch this production, the finest I’ve seen in years of reviewing Marin Shakespeare.…‘Othello’ …an engaging–absorbing–show …a remarkable presentation that gets across the shape and sense of one of Shakespeare’s best-known stories, with all the word-play, action and conflict–internal as well as out in the open–a Shakespearean tragedy entails … not something always seen, even in otherwise satisfying productions. The entire cast becomes an ensemble, with some outstanding individual performances. Dameion Brown… plays the lead role in The Bard’s tragedy–and carries it with dignity and authenticity in voice and actions.”
– Ken Bullock, Berkeley Daily Planet