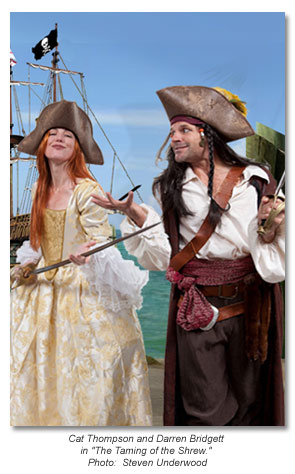 Ahoy, mateys! Our version of William Shakespeare’s The Taming of the Shrew is set in the age of Pirates, in the islands of the West Indies.

Lucentio, a wealthy student, arrives in Cocomo, along with his trusty servant, Tranio, when they see Baptista Minola with his two daughters, the beautiful Bianca and disagreeable Katharina. Close behind are Bianca suitors, Gremio and Hortensio. Baptista announces that no one may marry Bianca until a husband has been found for Katharina, and suggests that the suitors provide school teachers for his daughters, as that will win favor. Hortensio and Gremio decide they must work together to find a husband for Katharina so they will be free to compete for Bianca’s hand. Lucentio, who has been watching all of this, has fallen in love at first sight with Bianca. Tranio suggests that Lucentio disguise himself as a schoolmaster and become her tutor. Tranio will pretend to be Lucentio.

Petruchio, a young and reckless adventurer, arrives in Cocomo with his servant Grumio. A misunderstanding leads the two old friends into a squabble, which is quickly settled by Hortensio. Petruchio informs Hortensio he has come to Cocomo to “wive and thrive” and Hortensio tells Petruchio about Katharina: she is “intolerably curst” but her dowry will be enormous. Petruchio demands to see Katharina immediately, and agrees to introduce a disguised Hortensio as a tutor for the girls, so he can get closer to Bianca.

At Baptista’s house, Katharina is torturing her sister, demanding to know which suitor she prefers. Baptista pries the two girls apart, just as Petruchio, Gremio and the other men arrive. After the “schoolmasters” have introduced themselves, Petruchio asks to meet Katharina and decides that no matter how shrewish she is, he will marry her. When Katharina arrives, the two engage in a war of words, following which Petruchio announces that he will marry Katharina the following Sunday. He departs to prepare for the wedding. Tranio – who is pretending to be Lucentio while the real Lucentio tutors (and woos) Bianca – and Gremio both plead for Bianca’s hand in marriage. Baptista says whoever can assure Bianca the most wealth may wed her. When “Lucentio” claims riches far exceeding Gremio’s, it is agreed that as soon as he can prove his father’s consent, he may marry Bianca.

Hortensio (disguised as the music instructor Licio) and Lucentio (disguised as the schoolteacher Cambio) “instruct” Bianca, fighting for her attention. However, when Bianca is alone with Cambio, she lets him know he should “despair not.” On Katharina’s wedding day, the guests all gather, but Petruchio is nowhere to be found. The servant Biondello rushes in to announce Petruchio is on his way, wearing very strange clothes. He storms in, drags Katharina to the church and carries her off to his home, shocking the other guests.

At Petruchio’s home, Grumio and other servants await. When Petruchio finally arrives with Katharina, he is violent towards the servants, starves and mistreats his wife, and muses that he will continue to tame his wife, until she is more obedient.

Back in Cocomo, Tranio and Hortensio spy on Lucentio and Bianca, who are clearly in love. Hortensio abandons his attempt to win Bianca’s heart, and decides to marry a wealthy widow instead. Biondello sees an old pedant coming down the road and suggests they have him pretend to be Lucentio’s father, to give assurance to Baptista of Lucentio’s wealth. The pedant agrees, and Baptista is convinced. When Petruchio brings Katharina back home, she finally understands the obededience he requires of her. They meet Lucentio’s real father Vincentio on the road, and continue together toward Cocomo. At Baptista’s house, Vincentio meets the pedant, who has stolen his identity. Finally, Lucentio and Bianca enter and inform their parents they have eloped. After everyone has left, Katharina and Petruchio share an intimate kiss in the street.

Baptista and his guests enjoy a party in honor of Lucentio and Bianca. During dinner, Hortensio’s widow and Katharina get into a heated argument. After the women leave the table, their husbands make a wager over which wife will come when called. Katharina is the only woman to obey. She gives an impassioned speech about the duty women owe their husbands. All the guests are amazed: Petruchio has truly tamed his shrew.