Romeo and Juliet is one of the most magical Shakespeare plays – but it relies heavily on a huge dollop on on-stage chemistry between the actors playing the star-crossed lovers. Shakespeare gives these two teenagers some of the most beautiful poetry imaginable, as well as hugely rich character arcs, passionately intense predicaments, and scenes full of complex and conflicting emotions. Any director faces a dilemma: do you cast somewhat age-appropriate younger actors, or choose more experienced actors perhaps better equipped to handle the language’s technical demands?

As both the Producer and Director of this production, I can admit we didn’t get it quite right. While the production featured some stunning acting work, wonderful sword play, and sumptuous period costumes, it didn’t quite jell. Of all our productions, it was one of the least successful artistically.

No one goes into production planning intending to put on a less than satisfying show. It’s a question of chemistry and inspiration. Even the most talented theatre artists dare, risk and fail.

Fortunately, there was enough to love in the production that it remained entertaining and moving: Phoebe Moyer as the Nurse toying with Mercutio and then Juliet as she arranges the marriage; Amanda Diaz as Juliet with her tortured pain as she clung to the rope ladder intended for her husband’s wedding night now tarnished by Romeo’s murder of Tybalt; David Berkson as Romeo hitting a crowbar against the metal gate to Juliet’s tomb before smashing it into Paris’ skull; Michael Berg as the Friar delivering the final monologue that re-describes the tragedy. It’s impossible not to love Shakespeare’s language and characters in Romeo and Juliet, his most romantic and passionate tragedy.
– Lesley Currier 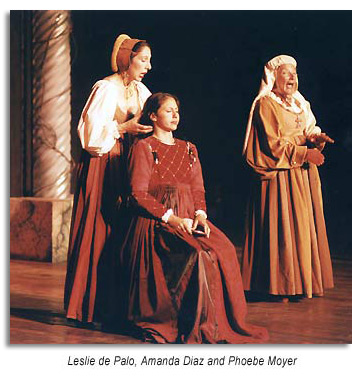 From the Playbill:
“I would like to thank Dr. Rob Clare for his inspiration and insight. Dr. Clare came from Oxford University to spend a week at Marin Shakespeare Company teaching our Interns and working with the Romeo and Juliet cast on techniques for approaching Shakespeare’s text. While the Interns dubbed his approach ‘Shakespeare Boot Camp,’ we all benefited from the ideas he shared about using Shakespeare’s structure and poetry to open new avenues of interpretation. Dr. Clare challenged me as a director to allow the characters the complexity and contradictions found in life and captured so brilliantly by Shakespeare. I hope we have used some of these tools in animating this unforgettable story of ‘star-crossed lovers.’”

“A refreshing and lively version of Romeo and Juliet is currently on stage in Forest Meadows at Dominican College in San Rafael. The outdoor theatre and its surroundings are used most advantageously in this production.”
– Bess Davoren, Tiburon Ark

“Fresh interpretations add exciting nuances in ‘Romeo & Juliet’…Paying rapt attention to the language and allowing lines to suggest fresh interpretations, fresh business, the cast as a whole found exciting nuances to add to some of literature’s most famous characters… Due to the week-long training with Oxford’s Dr. Rob Clare, it’s the first act that sails along at the best pace… With poetry taking a front seat and the physical business still beautifully done, this production actually leads the audience to new interpretations as well. I can honestly say that Marin Shakes brought out elements of the language that I never had the pleasure to view on any other stage, and with a play of such enormous popularity, that distinction in itself is a great recommendation.” 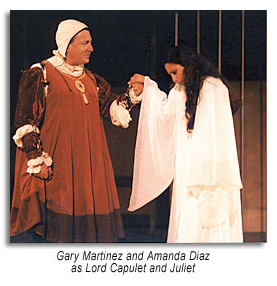 “Lesley Schisgall Currier has chosen to present this well known love story in the classic tradition, placing the romantic tragedy in Verona during the Italian Renaissance….The youthful, lovely Amanda Diaz gives a noteworthy performance as Juliet….Gary S. Martinez and Leslie de Palo are especially strong as Juliet’s parents….Phoebe Moyer’s Nurse and Michael Berg’s Friar Lawrence are high points of the production with their warm, sympathetic treatments of these two stock characters….But, alas, David Berkson seems to have been miscast as Romeo. 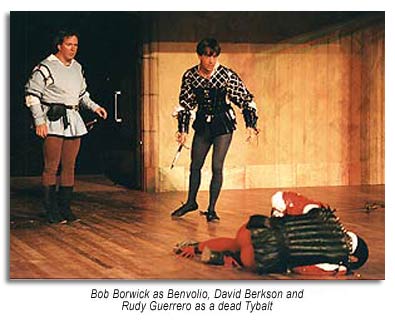 While quite effective in the company’s concurrent production…’The Complete Works of Wllm Shakespeare (abridged),’ he appears insufficient…to adequately fill the high requirements of this character.”
– Roberta Floden, Marin I. J. 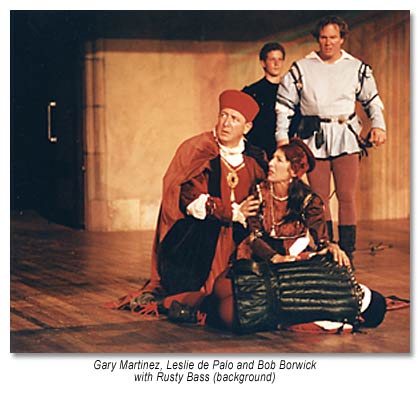 And a vicious pan:
“Maybe a support group would help. If the Bay Area’s collective need to sit outdoors and watch Shakespeare is so great that people will accept shows like the Marin Shakespeare Festival’s ‘Romeo and Juliet,’ something therapeutic ought to be done.”
– Steven Winn, San Francisco Chronicle 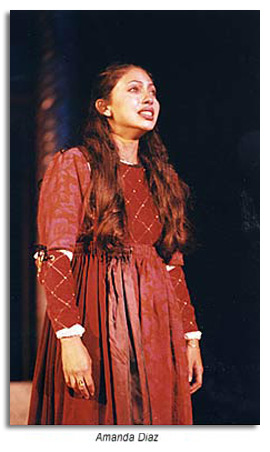 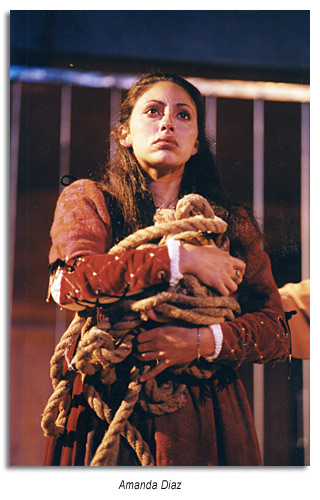